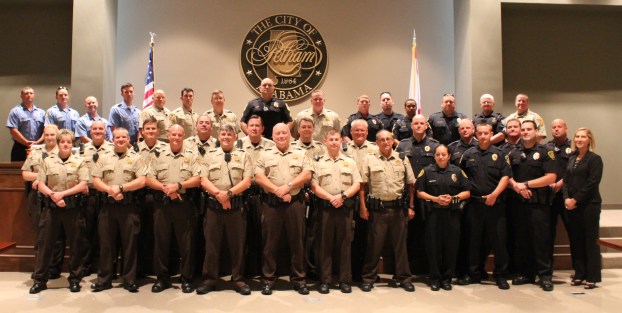 The inaugural graduating class of the Shelby County Mental Health Crisis Response Training program consisted of 40 first responders from throughout the county. (Contributed)

PELHAM – Forty first responders from throughout Shelby County participated in a mental health crisis response training July 24-28 that aimed to educate them about mental illness.

SCSO Lt. Cody Sumners said this training program is so important because on a nationwide level, the mentally ill are disproportionately incarcerated. Boyd added that a large portion of the medications administered in jails are psychotropic drugs, which are psychiatric medicines that alter chemical levels in the brain that impact how the brain processes information, such as altering moods, thoughts, perceptions, emotions and behaviors.

Sumners said the training was offered to county first responders for free because mental health is such a big issue in law enforcement right now.

“There was no cost to us for the training,” he said. “All of our instructors volunteered and we had some sponsors.”

The American Foundation for Suicide Prevention, Middle Alabama Area Agency on Aging and the Chilton-Shelby Mental Health Center were among the organizations that sent speakers to the program. Other speakers included private practice therapists and counselors.

“It’s important for first responder and the general public to realize that mental illness is real and does cause pain and suffering just like people suffering from diseases like cancer,” Sumner said. “They deserve to be treated like a human being.”

Sumners said the hearing voices exercise seemed to have the greatest impact on participants.

“A lot of the officers said that was a really powerful experience,” Sumners said. “We had them put headphones on to experience what it’s like to hear voices in your head while trying to accomplish simple everyday tasks. We really wanted them to understand what someone with a mental illness like schizophrenia experiences.”

The first responders were also educated on what mental health services are available in Shelby County and how to access them.

At the end of the weeklong training, a graduation ceremony was held for participants at the Pelham City Courthouse. Boyd said the intent is to make the program an annual event. Alabaster Mayor Marty Handlon and Probate Judge Jim Fuhrmeister were guest speakers at the graduation.

Handlon shared her experience with having a close friend who was suffering from mental illness commit suicide. She spoke about the need to remove negative stigmas attached to mental illnesses that prevent sufferers from seeking help and talking about their struggles.

“What you all have done this week is important,” she said. “We are so blessed in our area to have the professional resources that we do.”

PELHAM – By the end of band camp, the Pelham High School Marching Band will have completed 128 hours of... read more