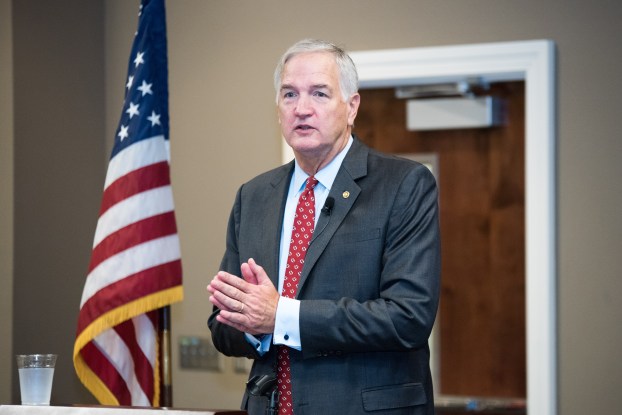 PELHAM – United States Sen. Luther Strange visited Pelham on Monday, July 31, as a part of the Greater Shelby County Chamber of Commerce’s Eggs and Issues Breakfast to provide an update on the latest political happenings in Washington, D.C.

The Montevallo, Mountain Brook, Homewood and South Shelby chambers of commerce cohosted the event, which was held at the Pelham Civic Complex.

Strange is a native of the Birmingham metropolitan area who worked as a lawyer prior to his career in politics. He served as the Attorney General of Alabama for six years before his appointment to the United States Senate about five months ago.

Within the Senate, he serves on the Budget, Armed Services, Energy and Natural Resources and Agriculture, Nutrition and Forestry committees.

With only five months of experience as a U.S. Senator, Strange said there are many things he doesn’t understand. One of those things is the failure to repeal the Affordable Care Act, which was signed into law by former President Barack Obama in 2010.

“I don’t understand why, after seven years of talking about repealing the Affordable Car Act, we didn’t have a plan ready to go,” Strange said. “Now we’re back to the drawing board.”

Strange also cited tax relief and infrastructure improvements as issues he’s interested in tackling. He said he’s an advocate of tax reform because taxes affect every aspect of the economy. He added that good roads and bridges are required to support the economy through the transportation of goods and to allow travel throughout the state.

Strange said he is unsatisfied with the slow pace and lack of accomplishment in Washington. But on a positive note, he said he is pleased with Presidents Trump’s Cabinet.

“He put together a quality cabinet,” Strange said. “They’re not just fine people, but experienced people with practical business experience.”

He said the effort to trim back regulations is moving in a positive direction.

“We have people dealing with the regulatory situation,” he said. “Regulations are good because they keep people safe, they keep the air clean and the environment clean, but it’s gone overboard now. Whether it’s tax, environmental or human resources regulations, we don’t want to overdo it.”