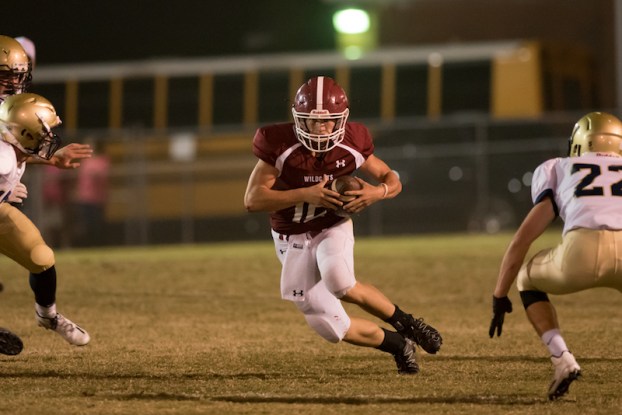 Chadwyn Russ will possibly be the most experienced and trustworthy quarterback in the county this season after a strong junior year in 2016. (File)

The Shelby County Wildcats football program has been battling hard since Heath Childers took over as head coach in 2014 and their progress has shown on the football field improving in each of his first three years as they’ve been looking to end a dreaded seven-year playoff drought.

Starting with three wins in Childers’ first season, the Wildcats have followed with improvement in each subsequent season winning four games in 2015 and five games in 2016, as they came up one win short of a playoff spot in both seasons.

Now, in 2017, Shelby County enters year five of the Childers era and has possibly its best chance at ending that playoff dry spell as it looks to continue improving and win at least six games during the upcoming season.

Childers knows that if that is going to become a reality, his defense has to improve. In 2015, the defense gave up 30.7 points per game and in 2016 32.9 points per game, which is what cost the Wildcats the majority of their losses as they gave up 30 points in seven of their 10 games last season.

Defensive coordinator Casey Crumpton has decided to adopt a 4-3 defense for the 2017 season, hoping the switch from a 3-4 will be the saving grace that helps improve this year’s defensive unit.

Part of that switch comes due to the impressive display of defensive linemen as Corbin Hillman, Dontavius Mayfield and Dawson Brooks will all be instrumental on the line. Mayfield and Hillman are two bigger bodied guys that will transition from the offensive line as well. Those three will be joined by Patrick Wilkins and Trent Sullivan who have shown a lot of promise.

The problem on the line, and really every position on the defensive side of the ball, is depth. After those five guys, there just isn’t much depth and as coach Childers said several times, if you lose one on the defensive side, you’re basically losing two players because they will most likely be a starter on offense as well.

Shelby County’s linebacking unit was the coaching staff’s biggest concern going into the offseason simply because they need to do a better job of wrapping up on tackles. Lucas and Braden Lowery ended last season strong and should be good leaders at the position, but coaches are wanting to see who is willing to step up and take control of the unit behind them come fall practice.

The secondary has taken to heart that winning is on the defense this season as both Crumpton and Childers have said it’s the most improved unit on the entire team.

A big reason for that praise is Jeremiah Crenshaw, who will also be the starting running back on the team, but both coaches said he is possibly the most improved defensive player as he leads the defense from the safety position.

Mitch Nash, who stands at 6-foot-4 and is one of the top receiving targets, will join Crenshaw at safety and has shown a lot of progress in the offseason. They’ll be joined by Greg Oliver and Lamont Bush who has been injured during the offseason but could possibly be their best defensive player.

While the defense has many question marks, especially in the front seven, the offense is a completely different story.

The backfield is especially impressive as Chadwyn Russ returns for his senior season at quarterback, while both Crenshaw and Bush saw significant time at running back last season.

In the Wildcats’ Wing T offense, Russ will be handling the ball every time the offense steps onto the field having to determine whether to keep the ball, pitch it, hand it off or roll out for a pass.

Covering Shelby County solely last season, Russ impressed me on several cases being able to take any carry to the house, run over guys with a smaller frame and make deep passes down the field. His leadership and ability should make him one of the most trustworthy and consistent quarterbacks in the county.

The Wildcats do have to replace Keyvontae Mayfield’s 1,322 yards and 15 touchdowns at the running back position, but Crenshaw and Bush were his two main backups last year in an offense that ran the ball on 90 percent of their plays meaning they saw plenty of action.

Both have plenty of ability to replace Mayfield and could even surpass him if they stay healthy this season, which along with blocking is the main concern from the two.

Nash will be the go-to guy when Russ decides to throw the ball this season, which Childers said is on him to get accomplished. Oliver, while smaller, is an elusive sophomore that adds another solid pair of hands.

The offensive line should give Russ and both running backs plenty of help with those defensive linemen also pulling double duty and Patrick Wilson as well as Dalton and Dawson Brooks helping out as well.

Just like last season, it could come down to one or two games determining whether or not the Wildcats end their postseason drought, which means losses like the 27-20 let down in week three last season to Moody can’t happen.

They were 2-0 at that point and had a chance to move to 3-0 overall and 2-0 in area play, which would have given them a leg up on the rest of the area.

This year, the team should be in that same boat and if they succeed in moving to 3-0, they’ll be in great shape to make the playoffs despite their tough schedule the rest of the way.

Games against St. Clair County, Moody and Woodlawn are must wins, and stealing a game against Fairfield or Pleasant Grove would help tremendously, but in the grand scheme of things if the Wildcats can stay healthy, they’ll be celebrating their first playoff berth in eight years come November.

Cheyenne Thompson gets closer to Woman of the Year Award

FROM STAFF REPORTS INDIANAPOLIS, Ind. – University of Montevallo senior Cheyenne Thompson has been named a conference finalist for the National... read more