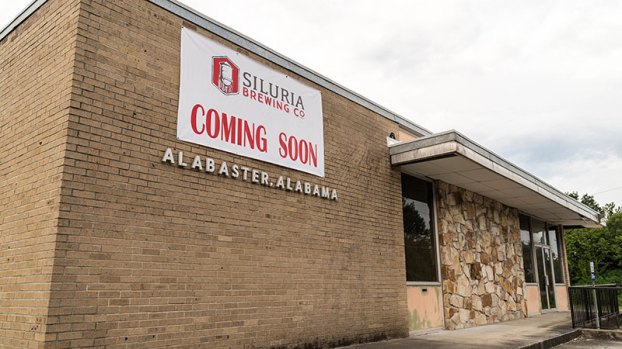 The Siluria Brewing Company will be housed in the former Alabaster post office building off First Avenue West, and likely will open in late 2017. (Reporter Photo/Neal Wagner)

ALABASTER – A local craft beer company is working to bring new life to the long-vacant former Alabaster post office building on First Avenue West, and is planning to open the new establishment by the end of the year.

The Siluria Brewing Company is in the process of renovating the building to house a brewery, taproom, private meeting room and outdoor area, and is shooting to open to the public near the end of 2017, owner Danny Sample said during an Aug. 1 interview.

“Right now, we are looking at a timeline of opening in December, permits permitting,” Sample said.

The company has already made some changes to the old post office building, and will begin making major renovations in the second week of August.

Silura Brewing originally was planning to open in a building fronting U.S. 31 in the old downtown Alabaster district, but decided to move to the old post office after looking at the logistics of its brewery operation, Sample said.

“We’ve gone from a three to a five-barrel brew system, and we really needed a concrete floor to be able to handle that. It’s about 12,000 pounds,” Sample said. “The old post office is a perfect setup.”

The company is planning to meet with the city’s Building Department in the next several days to review plans for the new location, and still must have the property rezoned to allow the brewery to move forward. Once the property is rezoned, Siluria Brewery then must obtain an Alcohol Beverage Control license before opening its doors.

Once open, the brewery will serve a range of beers from smooth ambers to bitter India pale ales, and most will be named after Alabaster landmarks such as railroads to quarries.

“We’ve got between 13 and 16 different recipes,” Sample said, noting the venue also will have frequent visits from food trucks. “We can’t wait to open to the public.”

To keep up with the brewing company’s progress, visit Facebook.com/siluriabrewing/.