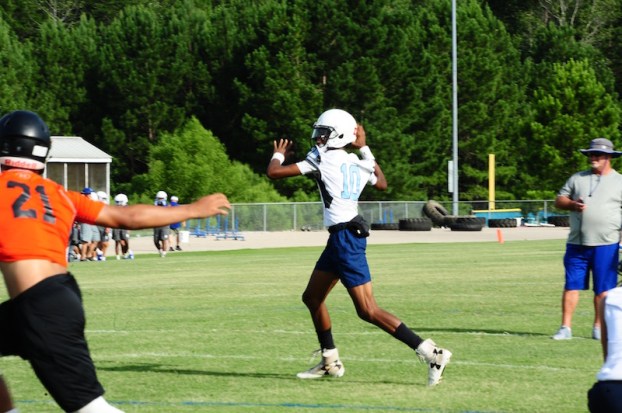 Calera will look to improve in year two under head coach Andrew Zow as they are hungry to grab a region championship that narrowly escaped them in 2016.

Year one of the Andrew Zow era went more than according to plan for the Eagles as they finished second in Class 5A Region 3 after losing just one region game to Demopolis, but a second-round exit from the playoffs has this team hungry for more in 2017.

Calera’s success at getting to the playoffs has been second to none, but winning has been a different struggle as they come up on 10 years of not making it past the second round. In 2007, the Eagles made a run all the way to the semifinals where they fell 26-18 to Cordova, but hasn’t seen that extended run in November since.

This year, despite the loss of several top playmakers, there is plenty of room for excitement for the Eagles as they look to not only make the playoffs for the sixth consecutive season, but also make a deep run at a state championship.

While the loss of several key playmakers offensively might have many concerned, this year’s squad returns plenty of production that will make those losses feel minimal.

Returning at quarterback will be junior Cornelius Brown, who Zow says could be the next big thing if he stays focused. Brown transferred in last season and got the opportunity to start a few games late in the season, including the playoffs, and impressed the coaching staff as a young sophomore.

Brown has looked more than the part as not only a vocal leader on the team, but standing at 6-foot-5, he holds an unbelievable height and athleticism at the position. His arm has been impressive during the summer, and though he leaves the pocket a lot, he can make all the throws on the run or in a pocket presence.

Lending a hand to Brown in the backfield will be the return of leading rusher Decorean Mickens, who was part of a three-man rushing committee last season that ran for more than 3,000 yards. The loss of Trezman Harris, 705 yards, and Alex Dozier, 700 yards, will make a big impact, but Mickens returning 760 yards and 14 touchdowns with no fumbles on 95 carries makes him a strong number one guy after entering last year as the fourth string running back.

The Eagles will also have to replace 39 catches, 760 receiving yards and six receiving touchdowns as Yatil Gant has graduated leaving a gap at receiver. Demarius Woods, while only 5-foot-7, 155 pounds, looks to be the guy that will replace Gant and his ability to beat people off the line and get up makes up for the small size, which has shown throughout the summer. Dylan Killingsworth, Chandler Smith, Quindarius Crews and Cameron Day will all give added depth to the position and haven’t dropped many balls in the spring or summer.

The offensive line loses three guys in Mackenan Thompson, Cody Cook and Brannen Earnest leaving three big holes, but Two starters in Caleb Buckhannon and Blake Jones are back. Size and athleticism are a common theme up front for the Eagles both offensively and defensively as many will be tall and slim going into the season, which bodes well since most will play on both sides of the ball.

While the defensive line will feature several of the same guys having to replace three starters, Anthony Washington and Trey Yowe will help out. Yowe, who stands at 6-foot-7, has lost 50-plus pounds in the offseason slimming down from 425 pounds to 363 pounds, which gives them a solid guy to lock up the middle.

Calera also loses leading tackler Jaramy Dozier on the defensive side of the ball but get back senior Dyson Edwards. Ethan Lemley, Michael Banks and Trent Yowe will bring the linebacking unit together. That unit will feature three seniors and one sophomore in Yowe, giving it plenty of experience and knowledge heading into the season despite lack of starts.

With inexperience up front on the defense, it helps that the secondary will have several playmakers in 2017. While they lose Tyler Ferguson, who was the leader among the unit last year, they get back names like D.J. Williams, Jermaine Ross, Jermaine Wilson and backup running back Terry Burrells.

This might be the most athletic section of the team as almost every secondary player will be a skill player on the offensive side of the ball as well.

Kicker Zachary Ford, however, is the biggest non-question mark according to head coach Andrew Zow. Ford is listed as one of the top kicking recruits in the country as a junior and made two game winning kicks a season ago proving his importance.

Calera should easily make the playoffs for the sixth consecutive season, but how far they go once in the postseason will be up to their defense. The offense is loaded and if forced to play in a shootout should be able to do so, but last season the defense gave up 26.9 points per game and all three of their regular-season losses came due to giving up 38 points or more.

The two key games this season will come against Dallas County in game three and Demopolis in game five. Calera beat Dallas County by just three points in a thriller last season on the road, while Demopolis handed the Eagles their only region loss 38-13 preventing them from a region championship.

Win both of those games and they’ll have very manageable region matchups against Central Tuscaloosa, Jemison, Marbury and Sumter Central — meaning it is completely up to Calera how good they want to be.

It’s still too early to tell if this year’s squad will be able to win a region championship because this team has a lot to prove defensively, but should they come together and grow as a team by the end of the season, there is no doubt in my mind they can get to the third round of the playoffs.

By ALEC ETHEREDGE | Sports Editor CHELSEA – Fall is quickly approaching, which not only means the end of the... read more