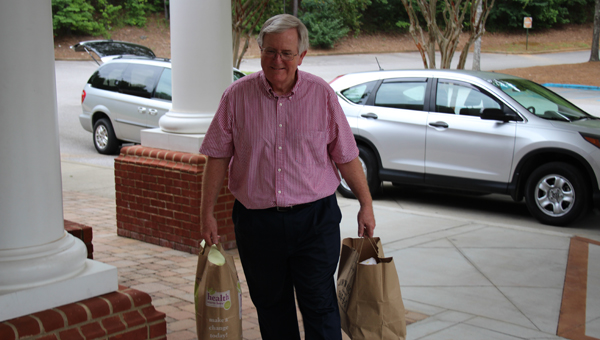 NORTH SHELBY – Asbury United Methodist Church once again showed up to help others.

“The generosity of our congregation overwhelms me year after year,” King said. “The idea came several years ago in recognition that God does not charge anything for his grace, and our church should live out that example and help out our neighbors without charging them.”

Held since about 2010, God’s Garage Sale has typically been held in the church gymnasium, with those in need invited to come in and shop at no charge.

However, construction of an addition to the church has prevented the garage sale from being held for two years.

Instead, donated items last year and this year have been shared with ministry partners, including Oak Mountain Missions (furniture and appliances) and Grace Klein Community (clothing and household items).

The garage sale should return to the church next year, King said.

“Typically, we set up the gym like a big department store with clothes here and appliances there,” he said. “We invite people to come in and shop, and it’s all free. People are lining up three hours in advance. Every volunteer who’s there cries the whole time. People can’t believe it’s free.”

The event is scheduled to fall just before the start of a new school year, King said.

“It helps so many families that have children going back to school,” he said.

King and other volunteers used a truck to pick up donations on Friday, July 28, and other donations were dropped off at the church.

The team picked up everything from dishwashers to sofas, from locations from Liberty Park to Chelsea, King said.

“It was an amazing outpouring,” he said. “That 26-foot truck was loaded from stem to stern. It rained on us half the day, and we didn’t care. We were doing the Lord’s work, and that’s OK.”

NORTH SHELBY – The person killed in a four-vehicle wreck in the 4600 Block of Valleydale Road on Monday, July... read more