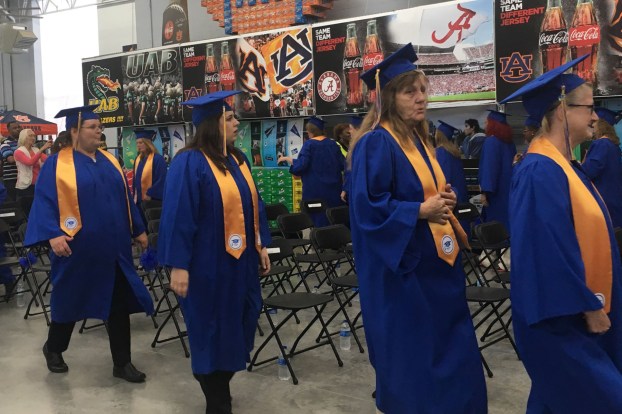 The first graduates of the Chelsea Wal-Mart Training Academy file in to take their seats at a commencement ceremony on Aug. 3. (Reporter photo/Amalia Kortright)

CHELSEA- The Chelsea Wal-Mart Supercenter celebrated the graduation of its first Wal-Mart Chelsea Training Academy class at a ribbon cutting and commencement ceremony on Thursday, Aug. 3.

“We’re very excited to be in the city of Chelsea. Chelsea is a beautiful city with beautiful people,” Wal-Mart Regional Manager John Tow said.

According to Tow, this graduation marks the beginning of the academy in Chelsea, which will provide training to associates from 29 stores in the Birmingham area and is one of 200 training academies that are opening in stores across the nation.

After this point, Tow said the academy at the Chelsea Wal-Mart will train up to 90 associates per week.

“The retail business is changing rapidly, and customers are wanting more and more,” Tow said. “We’re teaching our associates on how to meet the demands of our customers.”

Tow said one of the main focuses of the Wal-Mart Training Academy is to teach associates about the “one best way” to manage their store.

“It’s to provide a consistency that they would not get at their stores,” Tow said. “When you have 29 stores, you have 29 different ways of doing things. After we have multiple classes come through, you’re going to see more consistency in this area.”

Tow said Wal-Mart began planning to open a training academy in Chelsea after it recognized the logistical benefits of that location.

“Wal-Mart’s philosophy is operating one store at a time, one community at a time,” Tow said.

Tow said the first class consisted of 50 graduates who all work as hourly supervisors at the Chelsea Wal-Mart. During the ceremony, Grace Gibson, the first female, African-American store manager in the state of Alabama, shared some words of advice with the new graduates.

“There are a lot of opportunities at Wal-Mart. You just have to be ready to say ‘yes’,” Gibson said.

Graduate Tiffany Barclay said going through the training academy taught her about the financial aspects of managing a store, prepared her for future roles within the company and helped her better perform her current job, which she already enjoys.

“The academy is opening a lot of doors and a lot of opportunities,” Barclay said.

During the ceremony, Wal-Mart donated over $40,000 worth of grants to 14 local schools, nonprofits and other organizations.

By NEAL WAGNER / Managing Editor HOOVER – During her short time as a resident at Alabaster’s Shelby Ridge... read more