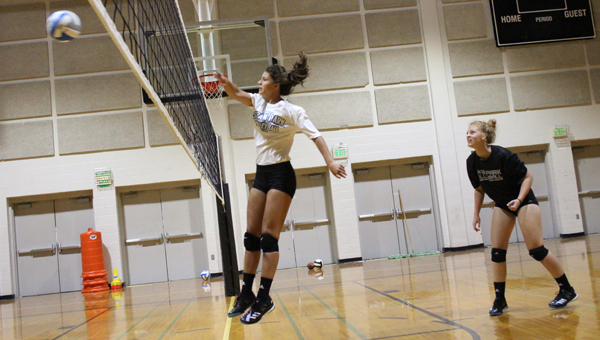 New group of Jags look to take the next step

Senior outside hitter Marlee Johnson and junior outside hitter/middle blocker Sha’Kevia Hogan are the only two returning starters for the Jaguars, who were knocked out in the first round of the playoffs last season by Oak Mountain.

The team’s two center pieces are familiar faces on the court. Johnson is beginning her fourth season as a varsity player, and Hogan has played on the team since her freshman year.

Senior setter Caroline Horton is the other returner from last year’s squad. She did not start in 2016 but will counted on to play a key role in 2017.

Coach Kellye Jordan Bowen said that although the experienced players are small in numbers, they are setting a gritty tone that the newcomers have embraced.

“If a drill isn’t being done right, they’ll stop up,” Bowen said. “They let them know when the intensity isn’t where it needs to be. I think this is the best dynamic we’ve had. They all get along, and they play hard.”

It did not end the way the Jaguars hoped, but the coach is hopeful this year’s squad, which Bowen said should be better defensively, can take another step.

Along with the start of practice, Bowen said the team would sit down and talk about the big picture.

“Everybody knows what the goal is—it’s to make the state tournament—but [the discussion] will be about how you get there,” she said.

The Jags began practice the second week of July, including camps at Guntersville and Hoover, but the work will begin in earnest on Monday, Aug. 7 with two-a-days.

The season begins for SPHS with a visit to Thompson on Aug. 31.

A visit from rival Hoover High School on Sept. 7 will be the only home game for the Jaguars until a tri-match with Thompson and McAdory on Sept. 18, which will begin a homestand that will last until Oct. 7, including Spain Park’s HeffStrong/Dig in the Park tournament Sept. 22-23.

The regular season ends at the Walker Tournament on Oct. 21, with the area tournament scheduled for Oct. 23, super regionals on Oct. 26-27 at the Von Braun Center in Huntsville, and the state tournament at the Birmingham CrossPlex.

By ALEC ETHEREDGE | Sports Editor Year one of the Andrew Zow era went more than according to plan for... read more