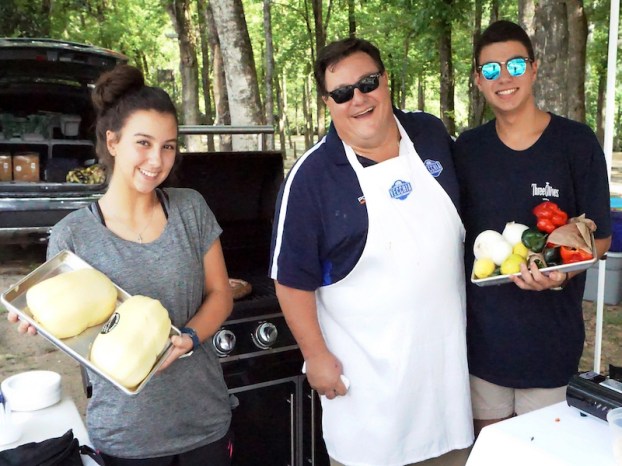 Chef Benard Tamburello assisted by his daughter, Raquel, and son, Hola Nathan, gave us a taste of an original creation based on the little-know spaghetti squash. (Contributed)

The previous day, Tamburello shared, he and his son, Hola Nathan, made 25 pounds of homemade sausage and samples of it were also proffered. In a previous demo at Helena Market Days, he made homemade mozzarella.

Chef Tamburello insists on authenticity in his restaurants, which is why all is made in-house. Vecchia even uses pizza ovens shipped from Italy.

“I am a proponent of Buy Fresh, Buy Local all the way,” he acknowledged, adding that his restaurants use hydroponic herbs grown in Calera.

In his preparation, Tamburello wowed his audience with rapidly graceful and practiced knife skills to prepare the vegetables utilizing every part with no waste.

For example, Tamburello first chops garlic cloves in half, then cuts them more finely, “tighter” so that the garlic “spreads over your food like a rainbow.”

Explaining that his wife, Brianna, has recently found she is allergic to many foods, he has embarked (reluctantly) upon a new vegan adventure. Brianna cannot have any animal by-products, so in lieu of chicken stock, Tamburello flavors water with thyme, oregano, basil.

He also pointed out that it is easy to substitute spaghetti squash for pasta and top it with marinara sauce for a lighter-on-your-stomach dish.

And, also a tip on how to store fresh herbs in the refrigerator. “Herbs are a flower, put them in a bottle of water and wrap in paper towel.

After the chef demo, Intermission struck up Van Morrison’s “Tupelo Honey” and shoppers began to appear with bouquets of fresh flowers grown by Candra Dee Latta of Latta Farms.

Latta also sells home made jams and specialties like Peach Syrup (topping) and Ginger Syrup, which can be an alternative to honey for sweetening tea. She will give an upcoming market demo.

Many hands make quilts of valor