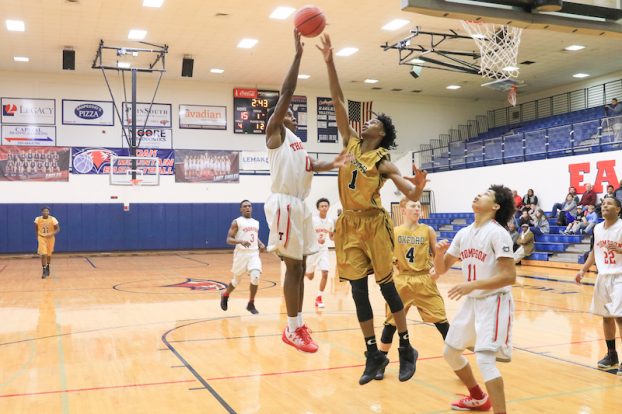 Thompson’s Drew Thomas officially announced he was committed to Shorter University via Twitter on Aug. 2. (File)

Over the past four years, Thomas has been one of the most recognizable names not solely on the Thompson basketball team but across the state as a premier player and one of the more likeable guys according to several classmates he laced up his shoes with.

While that era has officially come to an end, Thomas will see the hard work and sweat of the game finally pay off as that dream he had 10 years ago in his driveway will become a reality thanks to signing a full-ride basketball scholarship to attend Shorter University in Rome, Georgia.

“This marks the very beginning of stuff starting to pay off for me,” Thomas said. “I’ve got a long road ahead, but I’m so excited to be at a point in my life where I can continue to play this game and be a role model or example for other kids that want to make it this far.”

Thomas, who averaged 14 points, four assists and four rebounds per game during his senior season, has been a member of the Varsity team since he stepped onto campus as a freshman showing not only his natural ability, but the amount of hard work he has put in to get to this point, which he attributes to two different guys.

“Coach David Good has had the biggest impact on me getting here,” Thomas said. “He was an assistant at UAB before becoming my middle school coach. He just really instilled that hard work ethic in me and transformed me into a pit bull as a player.”

The other coach was his head coach for three years at Thompson, Patrick Davis, who just took Vestavia to the Final Four this past season in his first year with the Rebels.

“Coach Davis was a father figure to me before moving on to Vestavia and without him molding me into a better player and person, I wouldn’t be where I am today,” Thomas said.

Davis not only helped him progress as a player starting his freshman year, but played a big role in helping him decide on a perfect college fit.

“The proximity to home is going to be great and my relationship with coach (Wade Anderson),” Thomas said. “But a real key was them wanting to play my style of basketball.

“We’ll play more of a Princeton offense with a lot of threes and faster tempo. With coach Davis I got used to playing up tempo, fast basketball with a lot of shooting so when I started looking at schools, I tried to find one with a coach looking to play that playing style and Shorter was the perfect place.”

Thomas also said he had a great visit to Shorter’s Rome campus due to coaches making him feel at home and laying out a plan for his future.

“They just really want to see me succeed and care more about just what happens to me now; they want to see me do well after college too,” Thomas said. “Plus they want to win right away and that helped sell me because I want to be a leader and help lead a team to victory.”

While Thomas is excited for what his future holds, he also knows he wouldn’t have gotten this far without all the help from teachers and coaches at Thompson that helped pave the way.

“My teachers were all amazing throughout high school and emphasized work in the classroom,” Thomas said. “They pushed me and were really supportive. If I got a B they wanted to make sure I worked toward getting an A. Thompson just helped me become a better leader, while also helping me have fun playing basketball, which was really important.”

Thomas will now head off to Shorter and be a part of a program that is coming off of a 17-12 season and building toward the future. Thomas said he can’t imagine how excited he’ll feel the first moment he steps onto the college court, but he knows he has come a long way from the kid who woke up his neighbors early in the morning by shooting in the driveway to competing at the college level.

By ALEC ETHEREDGE | Sports Editor SCOTTSBORO – It has been a strong summer on the golf course for several... read more