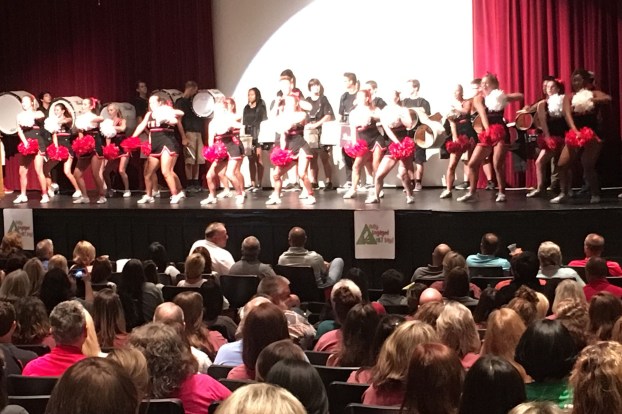 THS cheerleaders open up the 2017 ACS Institute Day at a pep rally for teachers and faculty. (Reporter photo/Amalia Kortright)

ALABASTER – Alabaster City Schools held its annual Institute Day to help prepare teachers and other faculty members for the upcoming school year and announce updates in the district in the Thompson High School auditorium on the morning of Monday, Aug. 7.

During Institute Day, Superintendent Wayne Vickers went over improvements that the school has made over the years.

“The majority of the people in this city are happy with Alabaster City Schools,” Vickers announced.

According to data presented by Vickers, the ACS graduation rate is 97 percent, as of 2017. Vickers said the current rate is a sizable increase from its rate of 89 percent in 2013.

“Our graduation rate is still one of the highest in the state,” Vickers said.

Vickers said the ACT composite score of ACS students has been higher than the state average since 2014.

As of 2017, 323 ACS students were enrolled in advanced placement courses. Vickers said the number of students enrolled has continued to rise throughout the years.

“The data shows that [they] have worked diligently to improve the scores of this city and these children,” Vickers said.

Vickers reported that 39 percent of the ACS budget comes from local revenue, and the majority of expenses were invested in instructional services in 2017.

Vickers also said the free or reduced lunch program had a 39.28 percent participation rate and a total of 1,338,811 meals were served during the last year.

For the future, Vickers discussed the schools many plans for further improvement. Vickers said he hopes that ACS will be listed as one of the top 10 schools in the state by next year.

Several ACS goals involve improving access to technology and increasing the district’s presence on the Internet and continuing to prepare students for academic and future success.

All schools in the Alabaster system are set to open on Wednesday, Aug. 9, and Vickers said he is proud and excited to work with all ACS faculty members throughout the year.

“We have done well and have probably put ourselves within the top 18 districts in the state,” Vickers said. “We’re ahead of a lot of schools.”