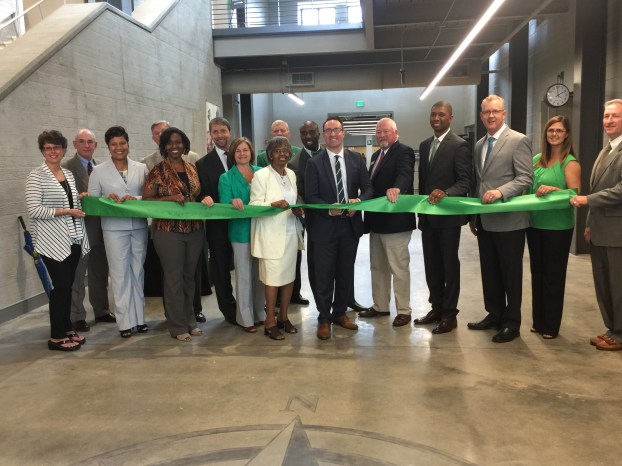 The Pelham City Council, Board of Education and school administrators gather near the entrance of Pelham Park Middle School for a ribbon cutting marking the school’s grand opening. (Reporter photo/Briana Harris)

“It’s very nice,” said Welch, whose daughter, Allison Welch, will be an eighth grader at the school. “The band room is great. My daughter is a percussion player in the band.”

Allison Welch said she is “very excited” for the start of school on Aug. 10.

PPMS Principal Justin Hefner had the honor of cutting the ribbon. School administrators, Pelham City Council and the Board of Education attended the ribbon cutting. Hefner said being a part of a school opening is a once-in-a-lifetime opportunity.

“You could spend a lifetime in this career and never get an opportunity to do this,” he said. “You don’t get this in every community.”

Hefner said 740 students are enrolled at the school so far, but that number is expected to increase a bit before the start of school. The school can comfortably hold more than 800 students.

“Our students are going to absolutely love this school,” Hefner said. “It’s state of the art. If you could dream up a perfect scenario, this would be it. Pelham is a community of hardworking and dedicated individuals and they deserve for their kids to go to a place like this.”

Many of the hallways have designs on the concrete floors to reflect curriculum themes. The school also features designated safe areas for severe weather events.

PPMS will house sixth through eighth grades. Each grade has its own wing of the school.

Superintendent Dr. Scott Coefield said he felt a sense of pride as the community entered to school.

“I expected people to show up, but they just keep coming,” he said. “This is something to really be proud of and we’ve got more to come. We’re doing things as quick as we can get to them.”

Coefield said he’s also proud of the PCS staff and the Board of Education for all of the hard work they’ve put in.

“Today is a great day for our city,” Councilwoman Mildred Lanier added. “It’s great to see parents and students touring the new school.”

Lanier said she wants Pelham residents to know that their city leaders are dedicated and committed to making sure students receive the highest quality education in the best facilities possible to ensure learning.

City Council President Rick Hayes said the goal is for the area where the new middle school is located to become the equivalent of a downtown area.

“This area will become the downtown area that Pelham’s never had,” he said. “This will be our city center.”

Mayor Gary Waters said Pelham residents are lucky to live in an area where city leaders work together so well to better the community. He said getting the school built took a lot of compromise and hard work.

By NEAL WAGNER / Managing Editor Several Shelby County cities are among the best for young professionals, according to... read more