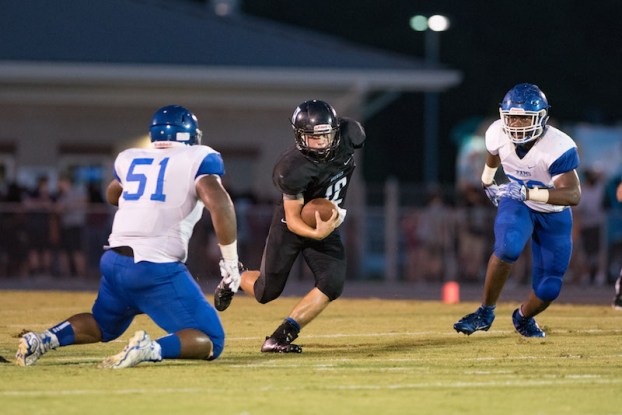 Lawson Peoples will take over as quarterback in 2017 as he looks to replace Riley Davis and lead the Huskies back to the postseason. (File)

In its first two years as a school, Helena’s football team found itself in the postseason thanks to finishing fourth in Class 5A region 4 in 2014 and second in the region in 2015, but the leap to the 6A ranks proved too much for the Huskies in 2016.

That 2016 season featured a finish of just 3-7 marking not only its first year to miss the playoffs, but the school’s first losing regular season. While that may look bad on paper, there was a lot of good to take away from last season that should help the Huskies in their second year at the 6A level.

While the Huskies finished fifth in region play in 2016, that mark was just one spot out of the necessary position of fourth place to garnish a playoff spot; and not just one spot, but one win away. The two games that seemed to cost them were a four-point loss to Pelham and a seven-point loss to Wetumpka, both of which came on Helena’s home turf.

This season, the Huskies look to take last year’s misfortunes and turn it into a success that is well within grasp thanks to the array of knowledge gathered in 6A last year.

On the offensive side of the ball, Helena will have to replace one of its top playmakers from last year’s squad in quarterback Riley Davis. Davis threw for 2,670 yards and 23 touchdowns in the last two seasons combined, which doesn’t sound like a crazy number, but his consistency and experience is what will be missed most.

Fellow baseball teammate and state champion, Lawson Peoples will take over the role in 2017 and look to help the team improve in several facets. While it has been an up-and-down summer for the quarterback, Peoples has been around the program for a while and knows his teammates well, which should create for good team chemistry.

Two-year starter Devan Walker has also graduated and was close to a 1,000-yard back each of the past two seasons leaving Helena with a gap to fill at the position. Senior Matthew Williams, a thin but elusive guy, and junior Kamau Green, a bigger and thicker back that squats 460 pounds, will be the one-two combo in the backfield.

The receiving position, however, makes up for the lack of experience returning in the backfield as Justin Stuckey and Dionte Tolbert both return for their senior season as two of the best receivers in the state.

Tolbert led the team in receiving last season by catching 41 balls for 500 yards and three touchdowns. He is a smaller guy that can beat you off the line and make all of the cuts, while Stuckey is an all-around athlete that can beat you with speed or go up and grab the ball out of thin air.

Taylor Knight was set to come back and be the leader of the offensive line to block for all of those skill players, but a shoulder injury in the offseason will make the two-year starter miss half the year.

This means seniors like Nash Maple, Jakari Forest and Brandon Evans will all have to step up and anchor the line. Behind them, a combination of young sophomores, who head coach Watt Parker says have looked strong, will have to step up until Knight is ready to return.

Moving over to the defensive side of the ball, there is some cause for concern in the middle, but both the defensive line and secondary have key tools back.

On the line, senior Christian Young and junior Jonathan Williams will both return to lead a veteran laden defensive line. Four more seniors in Scott Yunke, Christian Billings, Cade Julius and Austin Hutchison will finish out the line or add depth. While those six players are more than capable of handling the position, sophomore Chase Peary could play a major factor this season as a strong up-and-comer.

Stepping back a few steps into the middle of the defense is where there is cause for concern as the Huskies lose their top three tacklers at the linebacker position in Cade Pugh, Justin Watson and Nash Adams.

It’s left them with a lack of experience as juniors Jake Schmidt and Reese Davis will be looked upon as leaders at the position. They’ll be joined by senior Leonard Tucker, who will be the only senior in the rotation as sophomores Nathan Dunaway, Cole Pugh, Ervin Jones, Collin Early and Zachery Townly will compete for playing time.

The good news for the lack of experience at the linebacking position is that they are wedged between a veteran defensive line and secondary.

The secondary may be the biggest bright spot for Parker next to the receivers and defensive line as several upperclassmen and athletic playmakers will take snaps at the position.

Senior Kopeland Rosser will be one of the team’s overall leaders as he returns to his starting role splitting time at linebacker and safety. Senior Jordan Wallace, junior Ryan Lewis and Sophomores Brodie Jones and Ladarrius Rice will join Rosser at safety. Stuckey and Williams will transfer over from the offensive side of the ball to handle the starting cornerback duties as two of the best athletes on the field.

Despite losing a lot of talent in the backfield on offense and in the linebacking corps defensively, this team might have more depth than it has in any of its previous three seasons.

While there is a strong concern at the linebacker unit, Helena’s 3-4 defense allows linebackers and safeties to coincide. That along with 10 guys ready to play at the position during any given game and a ton of veteran experience could make this 2017 Helena defense one of the best in 6A Region 3. It will be tough for the Huskies defense to be better than the 2015 squad that gave up just 16.3 points per game, but expect it to be much improved from last year’s 26.1 per game.

If the defense lives up to that kind of expectation, that will take a lot of pressure off of Peoples at the quarterback position and free him up to find Tolbert and Stuckey for big plays offensively.

Just like Pelham and Chelsea in the same classification, Class 6A Region 3 is the most difficult to figure out. Opelika will most likely be the favorite again this season, but everyone else in the area is on a much more level playing field talent wise than a year ago meaning the Huskies will easily be in a battle for a playoff spot whether they finish second or fourth.

By GRAHAM BROOKS / Staff Writer HELENA–Parents who wish for their children to participate in fall baseball, softball or soccer... read more