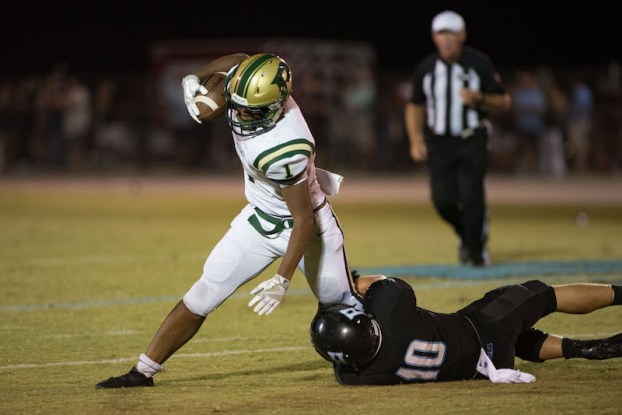 Pelham will have 36 juniors on its football team come fall of 2017, something that gives the team more experience than it has had in a while. (File)

In two combined seasons at the helm of the Pelham Panthers’ football program head coach Tom Causey has a record of 3-17, not something that has excited the fan base.

While many are quick to criticize the subpar record and are already to write off the Panthers heading into the 2017 season and year three of the Causey era, I’ll be the first to tell you to slow your role on the hate train.

There is plenty of reason for optimism heading into the new year, which kicks off on Aug. 24 with a home matchup against the Homewood patriots.

Just like when a college football program has a coach leave them in a porous situation due to recruiting violations or just up and leaving the school, the split of Pelham High School into two different schools leading to the establishment of Helena High School, wreaked havoc on the Panther football program.

What happened when the Huskies were established as a team in 2014 was the complete destruction of not only a roster, but a team. It left Pelham with a solid group of seniors that didn’t want to leave for their final year, which boded well for the present, but meant a very bleak future.

Once those seniors graduated, most of Pelham’s roster was full of new guys as most had made the transition over to Helena. This left the Panthers with a team built around freshmen and sophomores that had a lot of growing to do.

Now Pelham grown into a strong class that features 36 juniors, most of which have seen playing time since they were freshmen, which not only gives the Panthers loads of experience this season, but next year as well.

When you start breaking down the roster, your eye immediately falls on to running back Nicholas Blackburn, who seems to have been a part of the program for a decade now. His adventure is finally widning down, however, as he prepares for his senior season.

Blackburn carried the ball 189 times last season running for 938 yards and five touchdowns.  Standing at six-feet tall, 215 pounds, Blackburn is a powerful runner and has put on 30 pounds in the past two years, which has made him better all-around at the position and will be key as he looks to carry the load for the Panthers in 2017.

He has been part of an offense the last two seasons that saw the lowest of lows in 2015 going 1-9 and only averaging 14.3 points per game to then resurrecting and improving to 24.2 points per game in 2016.

This year the offense has plenty of tools surrounding Blackburn, including an offensive line that returns three of its five starters. The quarterback position may be one to keep an eye on as Matthew Rye is the projected starter. Many people were excited for his talents a season ago and with receivers like Edward Gipson, who stands at 6-foot-4, 180 pounds to throw to and a solid running game and offensive line, this Panther offense should continue to improve.

Defensively, Pelham will lose the heart and soul of the team in Jon Drake, who tallied 131 tackles and two sacks during his senior season at the linebacker position.

This year’s leaders on the defensive side of the ball will be in the secondary with senior Ladre Tabb and junior Patrick Durr. Both of those guys are stocky with a lot of speed. It marks the third straight year Durr will start in the secondary as he will be looked upon as one of the leaders of the entire team.

Ryan Jewell will be the leader at linebacker looking to replace Drake. Jewell, a second year starter, brings back 98 tackles and two sacks from 2016. The defensive line is a spot where Causey wants to rotate in as much depth as possible because he knows the team has lost games the last couple of seasons because of exhaustion late in contests. Brock Higdon, a defensive end, will be the leader of the defensive line and brings a great frame of 6-foot-7, 230 pounds to the table.

Over the last two seasons, the Panthers have given up 33.6 and 36.3 points per game, respectively. While Pelham’s offense should be improved, Causey knows it’s the defense that needs to be drastically better if Pelham wants to compete in 6A Region 3.

While the Panthers have a lot of strides still left to be made and in no way will go from a 2-8 team to a state championship contender, this 2017 team has a strong chance to make the postseason. With the number of upperclassmen finally on the team, Pelham is finally getting to where it can compete again.

Experience at any level, in any sport is key no matter what the talent level, and the Panthers now finally have that key they’ve been missing to unlock a door to the playoffs.

I predict the Panthers will walk away from the 2017 season with four wins, and that magical number could easily put them in that fourth and final playoff spot from the region. If the offense lives up to what its capable of and the defense improves, then Pelham should be light years better than the last two seasons.

By ALEC ETHEREDGE | Sports Editor It happened again in 2016, for the second straight year, the Chelsea Hornets’ football... read more