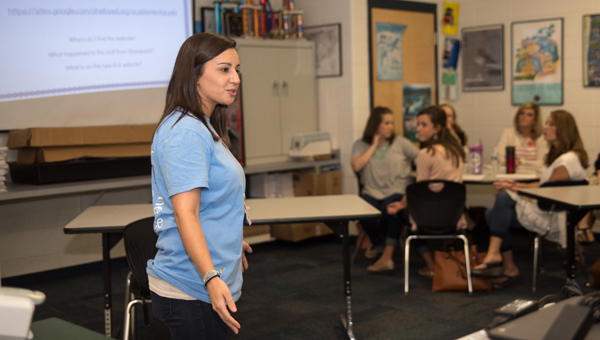 The summit was held on Friday, Aug. 4 at Oak Mountain High School with more than 450 employees in attendance.

Attendees of the Elementary Summit gathered in the OMHS auditorium to kick off the event then scattered for break-out sessions that focused on math, English Language Arts, National Board Certification changes, AMSTI, the Leader in Me program and more, SCS Elementary Program Specialist Tara Baldwin said.

“We wanted to give them some choices,” Baldwin said.

Dana Martin, supervisor of school improvement and federal programs, is overseeing the Leader in Me program for the school district. She and David Galvin, client partner for FranklinCovey, the company that produces the program, were among the presenters at the summit.

With the theme of “Inspiring a generation,” Leader in Me is designed to help students by leaders in their lives and prepare them with 21st Century skills.

Eight SCS elementary schools have implemented Leader in Me, with the hope that the remaining seven schools will join the others in the next couple of years depending on principals’ grant applications.

“If you don’t have faculty buy-in, it’s not going to be successful at your school,” Martin said.

Those who attended the presentations were asked to define leadership and think about why they went entered the education field.

Leader in Me was compared to a “Crock Pot” approach instead of a microwave.

“There’s no cookie cutter approach to this,” Martin said.

Martin and Galvin discussed a proposed schedule of implementation and pointed to Year 3 as a time where results become evident.

“This is when you really unleash the greatness of the students,” Galvin said.

The program will benefit all Shelby County Schools, Martin said.

“It doesn’t matter what the demographics are, we see this program making a tremendous difference in a positive way,” she said.

HOOVER – Hoover City Schools continues the process of implementing a revised fee schedule for use of district facilities that... read more