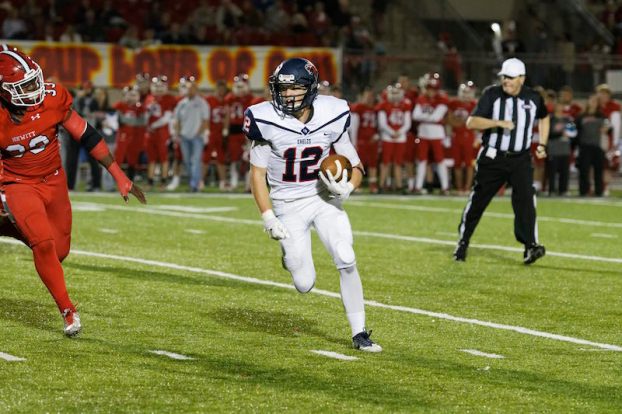 Luke Percer will play an integral part in Oak Mountain's success this season as he looks to take over the running back position. (File)

Oak Mountain set three school records in 2016, but not the kind of records the Eagles wanted to be breaking as their defensive struggles led to a record number of points allowed at 370 points, a record for most losses in a season with eight and a record for points allowed in a game after giving up 63 to Hewitt-Trussville in a first-round playoff exit.

Yet, the Eagles, with just three wins in 2016 somehow managed to fight hard and find their way into the playoffs thanks to all three of those wins coming in tough Class 7A Region 3 play.

While that worked out for Oak Mountain last year, head coach Cris Bell knows that if his team wants to make it back to the playoffs in year six of his tenure, they will have to be much more sound defensively due to a vastly improved region.

With teams like Thompson, who the Eagles beat by two points last season, Hoover and Spain Park all being as good or better than they were a year ago; the region will feature a fight for the fourth and final playoff spot.

It’s a fight that Bell and the Eagles hope to be a part of but they all know it’s going to take a much more inspired effort in 2017, which Bell says the team has taken to hear. He has said on multiple occasions they are already playing with something to prove despite making the playoffs last year.

Defensively is where the most improvement is needed after giving up 33.6 points per game and setting those two unwanted records.

Bell feels much more optimistic at this point than he did last year due simply to the return of at least one key playmaker at every spot on the defensive side of the ball.

While that unit should be solid up front, Oak Mountain has two solid guys back at the linebacker position. Jackson Murphy and Justin Evans both return to their inside linebacker position and are two of the best players on the team. Murphy was second on the team with 76 tackles in 2016 and had a team-high 14 tackles for loss.

Also helping the defensive improvement efforts will be the return of secondary leader Zach Nelson who had 26 tackles, five pass breakups, two tackles for loss and one interception last season. He’ll be joined by a fellow senior at the corner position in Brett Cruce.

The impressive aspect for the Eagles’ defense in 2017 will be the number of upperclassmen in the lineup as they are two deep with nothing but juniors and seniors.

For the second consecutive year offensively, Oak Mountain will look to replace its starting quarterback with the departure of Wyatt Legas. Connor Webb will step into his place and has pleasantly surprised coaches with how well he has picked up the option-style attack after moving over from the defensive side of the ball.

Two seniors in Connor Wilson and Ethan Duncan along with junior Luke Percer should give Webb a comfort level in the backfield as solid returnees to the running back position.

Percer will be the returning leader at the position bringing back 7.5 yards per carry, while Wilson—who was the B-back last year—brings back an extra 310 yards on the ground.

While those guys will be utilized in the Eagles’ option game plan, Oak Mountain tends to air the ball out a good bit for an option team making the receiving position key, especially the tight end. Carson Bobo will return to that position after catching 22 passes for 288 yards and three touchdowns last season. Bobo will be key in both the passing and blocking game.

Nathan Jones and Trey Allen, both receivers greater than 6-foot-3, will add two more guys at the receiver position as both were underutilized last season for their ability, according to Bell.

The offensive line will also be full of upperclassmen with experience, which is key in this offense having success. Four seniors and two juniors will be the main contributors at the position.

Experience is the biggest key when it comes to predicting the success of any team at any level of competition. I will be the first to admit that when I started this prediction story, I had doubts about this team simply because they don’t have any players with flashy numbers back.

That slowly started to change as I put this piece together and saw that every position is stacked with nothing but juniors and seniors. There is just something about that experience level and extra year of wisdom that has caused the Eagles’ to open my eyes a little bit more. Bell is the type of coach not to waste that talent.

While Hoover and Thompson should be the heavy favorites to finish first and second in the region, Oak Mountain will have the experience to battle for third or fourth with Spain Park, Vestavia and Mountain Brook—all of who will be starting many younger players.

By ALEC ETHEREDGE | Sports Editor It’s a new era in the AISA as all three of our county teams... read more