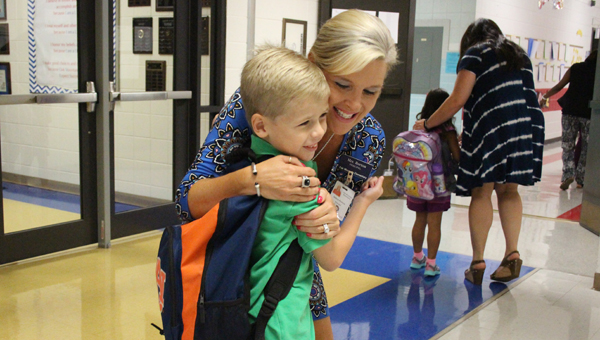 NORTH SHELBY – As students were returning to school—and kindergarteners venturing into their first day of school—Oak Mountain Elementary School officials were also celebrating the opening of a new Pre-K classroom.

About 730 students registered at OMES prior to the first day of school on Tuesday, Aug. 8, Principal Debbie Horton said, including 173 kindergarteners and 16 preschoolers.

On the morning of Aug. 8, volunteers opened car doors for students and Horton and her faculty and staff filled the halls to greet the familiar faces and give direction to those with wide eyes.

The school offers programs to help new students transition to the school, said Horton, during her sixth first day as principal at Oak Mountain Elementary.

Following registration in April, a free film showing, called “Movie on the Mountain,” was intended as a community event that would celebrate new kindergarteners and third graders moving on to Oak Mountain Intermediate.

Kindergarten Q&A’s and tours of the school have been held for years for incoming students and their parents, with a focus on setting up the children for success.

Over the summer, a kindergarten camp was held for the second year to further introduce new students to the school and its procedures.

“It helps a lot with the transition,” Horton said. “When they come on the first day, it’s not their first time seeing their classroom or hallway. It’s already helped their level of stress, which helps their parents’ level of stress.”

“First Class Pre-K,” part of the Office of School Readiness, should ease the transition more than anything for those chosen to participate.

A lottery was held to select 16 children out of about 60 applicants.

Through experience and play, Pre-K students will learn lessons including sharing and taking turns while enjoying story time, drawing and writing.

“There will never be any worksheets,” Horton said. “There’s a lot of interaction. The children will have a blast. They’re learning, and they don’t even realize it.”

One of the Pre-K students, Keylen Lewis, was dropped off at school by his grandmother, Jackie Dunnaway, who said Lewis was excited about the program.

“He has two brothers here, so he thinks he’s going to the big school,” Dunnaway said and added that Keylen’s first day was probably more difficult for her.

Ashley Shaffer and Susannah Edwards are teachers for the Pre-K program, which has been outfitted with a new classroom and materials.

“I’m very excited to be part of it this year,” Edwards said.