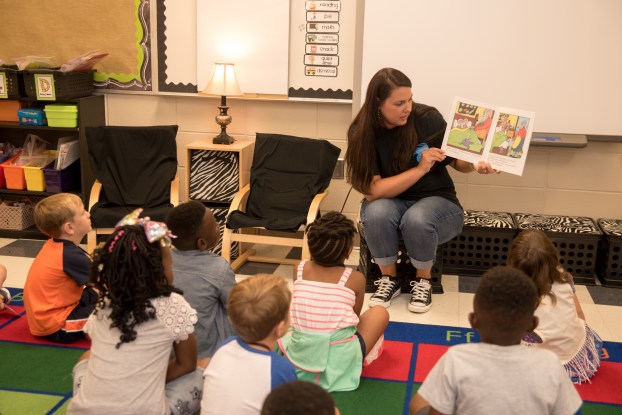 A Calera Elementary School teacher reads a book to her class on the first day of school on Aug. 8. (Reporter photo/Keith McCoy)

CALERA – There were more smiles than tears as students and parents entered Calera Elementary School on Aug. 8 ready to start a new school year.

Principal Genet Holcomb said 678 children were enrolled at Calera Elementary on the first day. Holcomb said the first day of school is exciting because it’s the beginning of building relationships that will impact students forever.

Holcomb said one of her main goals as principal is to provide a nurturing and safe environment for children so that they’re ready to soar. But despite Calera Elementary’s welcoming atmosphere, many parents still felt anxious when it came to dropping off their little ones on the first day.

Parents Corey and John Hand said they were more anxious than their daughter, Olivia, who started first grade.

“She’s super excited about school,” Corey Hand said. “I don’t think she’s felt any kind of anxiety or anything.”

Meanwhile, Corey Hand said she and her husband woke up at 3 a.m. to start preparing for the day. Parent Erika Ovando also said she was more nervous about the first day than her children.

“I have two kids at two different schools, so I’ve been all over the place this morning,” Ovando said while dropping off her daughter Mikaela, who started kindergarten. “Today she’s ready and excited, but it makes me just a little bit sad because I’ve only got one left at home now.”

When asked what she thinks kindergarten will be like, Mikaela simply replied, “It’s gonna be awesome!”

Parents Steve and Kelly Benton had a different reason for being nervous about their son staring kindergarten.

“Our situation is a little different because our son has autism,” Steve Benton said. “I think we mainly worry about how he’ll adjust and him getting through the day OK.”

But Kelly Benton said her son participated in the school’s four-day Kindergarten Camp so he’s already met his teachers and has an idea of what school is and how it will be.

“We mainly want him to do well and make friends,” Steve Benton said. “Meeting people and being social is a challenge for anyone with autism.”

“Everybody worked so hard to make sure we started the school year off right,” Holcomb said.

Chelsea and Columbiana parents dropped their kids off, some for the first time, at Mt Laurel, Chelsea Park, Forest Oaks... read more