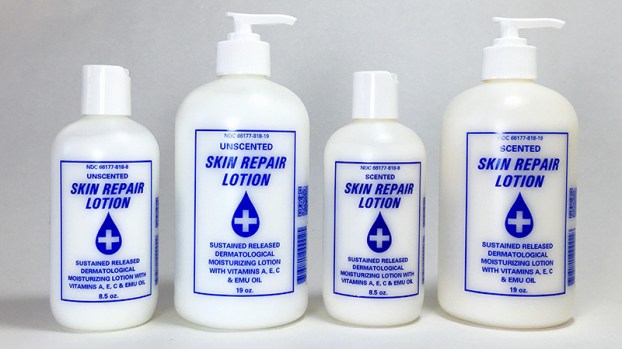 HELENA–This year marks the 20th anniversary of the founding of Aligon Pharmaceuticals, a local business hailing from Helena.

Aligon is renowned for its skin rejuvenating lotion with the name that says it all, “Skin Repair Lotion.”

Founder and president John Bryan reflected on how he started Aligon Pharmaceuticals and the trials and tribulations that led to where the company is today.

“I used to work as a pharmaceutical sales rep and travel primarily around the Southeast, but also other parts of the country selling Benadryl as well as some prescription medications,” Bryan said. “So I got to know most of the doctors and members of the medical community in Birmingham.”

As most people that live in Alabama know, Birmingham is one of the country’s leading medical hubs with the University of Alabama at Birmingham ranked No. 10 in the U.S. News and World Report rankings of best medical schools for primary care.

Birmingham is also a hotspot for medical research and development so when Bryan came across a non-comedogenic (doesn’t clog pores) lotion formula that was being developed to help people with chronically dry and sensitive skin, primarily those with ailments such as eczema and diabetes – who suffer from dry skin due to poor circulation, he knew it would be a product that could benefit a lot of people. In fact, there were many members of his family including him and his daughter that suffer from having naturally dry skin.

A week later, he found out his company was downsizing and he was getting laid off from his job as a pharmaceutical sales rep. With a wife and two kids under the age of 10 he decided to take a risk and instead of looking for a new job he ventured out on his own and started Aligon Pharmaceuticals.

“The first year was not without its challenges, but with a mortgage and a family to take care of, you do whatever you can to make it work,” Bryan said. “I started off small, selling Skin Repair lotion to independent pharmacies and when some were hesitant to carry the product in their store I just asked if I could leave a tester bottle by the pickup window and if they wanted to order later they could.” Luckily, the gamble paid off and the product was selling itself and soon Bryan was placing orders for Skin Repair lotion from every pharmacy that had a tester. Within a year, Aligon Pharmaceuticals was a profitable business.

Eventually Bryan got Skin Repair lotion into a distributor and started selling the product at chain pharmacies such as Walgreens, Rite Aid and even grocery store pharmacies like Publix and Walmart. As word began to spread about Skin Repair lotion, he started getting calls from customers in other parts of the country that wanted to know where they could buy the product. Soon orders were being placed from places like Soldotna, Alaska and the Virgin Islands.

“We thought Skin Repair would appeal mostly to people in their 50s and upwards who are more likely to develop skin conditions like psoriasis or are undergoing chemotherapy and as a side effect have severely dry skin. But as it turns out there have been several tattoo artists recommending our product to help their customers tattoos heal faster,” Bryan said.

He attributes this to such properties as “Shea butter that is anti-inflammatory and helps promote cell renewal as well as Kalaya oil which has a fatty acid component that closely mirrors the natural lipids of your skin forming moisture that is locked in throughout the day.”

Throughout the years, Bryan has had a few offers from people wanting to buy his company but he thinks it’s best to stay true to his local roots in Alabama and keep it in the family.

He wants his legacy to continue with his oldest daughter, Caroline Bryan, an entrepreneur in her own right who started the fashion brand, Luna Lia Lingerie. She will carry on the torch for Aligon Pharmaceuticals as John Bryan plans his retirement.

When asked what he plans to do during his retirement Bryan said, “I just want to spend more time with family and grand babies and focus on being there for them. I’d also like to get down to Orange Beach a little more often.”