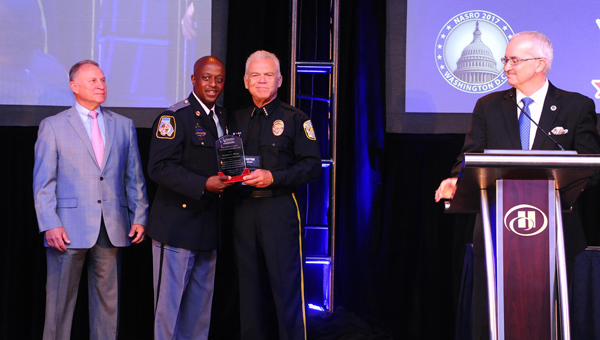 WASHINGTON, D.C. – A national award granted by the National Association of School Resource Officers has been named in honor of Hoover Police Chief Nicholas C. Derzis.

Derzis was also one of four people to receive the Chief Nicholas C. Derzis Safe Schools Leadership Award during a luncheon on July 25 as part of NASRO’s annual national conference in Washington, D.C.

Derzis, who has been Hoover’s police chief since 2005 and a representative on the NASRO board of directors since 2006, said the honor was a surprise.

“I said during my comments that my intel was not too good if they could have been planning this for a couple of months without me knowing,” Derzis said. “I’m not one of those guys who wants to take a lot of credit for stuff. We’ve got a lot of good people at the police department that do a lot of good work. The whole deal is to keep our kids safe, and that’s something we take very seriously.”

When the School Services Division was founded, it included about five officers. The division has grown to include 11 full-time and 12 part-time officers, Derzis said.

“I’ve been somebody that’s been very interested in safety in school and just really think that we have a great school resource unit.”

School Resource Officers require a skill set that enables them to be stationed in a school daily instead of patrolling, and to build trust among students, faculty and school administrators, Derzis said.

“It has been a great inroad,” Derzis said. “We get a lot of information from kids because they have a rapport with the officer. We’ve probably solved some crimes because people told us things, and we’ve kept crimes from happening.”

NASRO is a beneficial resource because it serves more than 4,000 officers from agencies across the country who are all interested in enhancing school safety, offering opportunities for police to pick up new ideas and learn best practices.

The Chief Nicholas C. Derzis Safe Schools Leadership Award “recognizes individuals for their contributions and dedication to a school resource officer program and the many children, parents, and faculty members of their communities and schools,” according to NASRO.

This year’s recipients of the award were Derzis, Chief Terrence Sheridan, Baltimore County Police Department, who implemented the first SRO program in the Baltimore/Washington region; Vicki Almond, Baltimore County Council, who advocated for her county’s SRO program both as a community volunteer and activist and as an elected official; and Dallas Dance, former superintendent of Baltimore County Public Schools, who led sweeping improvements in school safety focused on incident prevention.

“This is only the fourth time in NASRO’s 27-year history that the organization has named one of its awards for an individual,” a press release read. “In 2003, NASRO recognized Derzis’ department as a model SRO agency. The success of its SRO program is a direct result of the leadership Derzis provided. His commitment to school safety extends well beyond the city of Hoover, which is demonstrated by his service on the NASRO board of directors since 2006. Derzis’ work has led to many positive school safety initiatives across the country.”

NASRO is located in Hoover and was established in 1991. For more information, visit NASRO.org.

PELHAM – Police Chief Larry Palmer asked parents to be patient on Thursday, Aug. 10, as they drop off and... read more