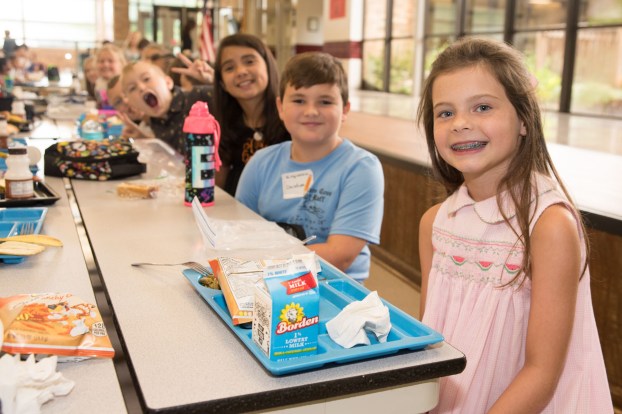 Chelsea and Columbiana parents dropped their kids off, some for the first time, at Mt Laurel, Chelsea Park, Forest Oaks and Elvin Hill Elementary Schools, as well as other schools in South Shelby County, on the morning of Tuesday, Aug. 8. Both parents and students expressed their anticipation for the new school year to start.

Hollis Kitchen said he wasn’t nervous about starting kindergarten at FOES, and was excited about all of the new people he is going to meet at school.

“I’m a little anxious, but I’m excited for him because he’s ready,” his mother, Mindy, said. “We’re looking forward to going to this school.”

Twins Hudson and Hunter Reed said they were nervous about starting kindergarten at FOES and will miss their younger sister while they’re at school. Marleigh Standridge said she is looking forward to learning about art.

While first grader Lila Bailey enjoyed her first year of school, she’s excited to start the new year. She said one of her favorite parts of school is getting on the bus to go home.

“In first grade, I think I’m going to learn a lot,” Lila said.

First grader Caroline Zieba said she thinks this year will involve more learning, and she looks forward to doing arts and crafts with her teacher, Kathleen Boehme.

While second grader Cash Hudson isn’t sure if he will have a good year or not, he said he thinks lunch and science are going to be his favorite subjects.

CPES kindergarteners Will Dunham and Carlyn Simmons said they’re already having fun at their new school.

“I’ve been in kindergarten for one day, and I learned stuff about being good,” Carlyn said.

Kindergartener Anderson Cummings said he’s going to enjoy physical education because he will get to play sports. He said he also looks forward to learning about a variety of different subjects.

EHES fifth grader Layla Griffith said this is the last year she will be at the school, and plans to make the most of it by helping her peers transition to middle school with her.

Third grader Lilly Crow said she was interested in learning about times tables, which she hadn’t learned in the second grade.

FOES, CPES and EHES are some of the few elementary schools in the Shelby County School District that teach students ranging from kindergarten through fifth grade.

For more information about FOES, CPES, EHES or other schools in the Shelby County School district, visit Shelbyed.k12.al.us.