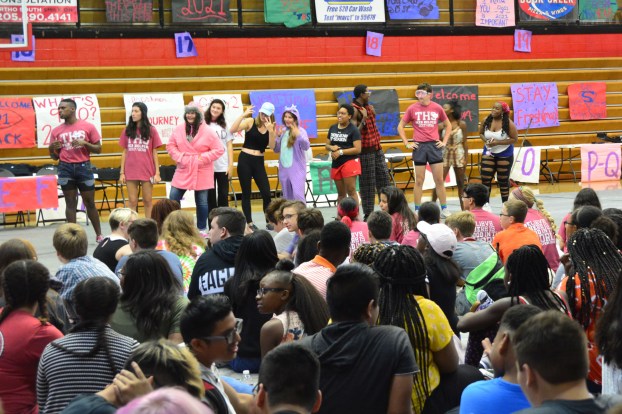 “Hopefully it makes their transition from middle school to high school a lot smoother,” Billings said. “It really helps the kids to see that high school is a little bit different.”

Billings said orientation started at 7:30 a.m., and began with small group activities lead by THS peer helpers and ambassadors. Students were also given the opportunity to tour the building and walk through their class schedules before closing orientation with an assembly in the gym.

By involving upperclassmen, Billings said new students were able to make connections and now know a familiar face if they’re lost or confused.

“During my freshman year, we were just thrown into high school. We didn’t really know where to go,” Evans said. “We want them to get to know the school.”

Freshmen Jackson Russell and Tyler Powell said starting high school will involve making many adjustments, but attending orientation alleviated some of their nerves.

“It’s a lot bigger. There’s more classes and more people, so it might be harder to get around,” Powell said.

“I had the chance to walk around my classes and see how high school is going to be,” Russell said.

Billings, who used the program at the school she used to teach at in Chicago, said the program yielded great results before and she expects to see the same at THS.

“We found a big reduction in discipline referrals, absences and tardies,” Billings said. “I really think that’s because the kids were more comfortable with the school.”

According to Billings, about 325 students attended orientation, including 70 to 75 percent of the THS freshman class.

HOOVER – Eighth grader Ellie Knippers has already been through her share of first days of school but still felt... read more