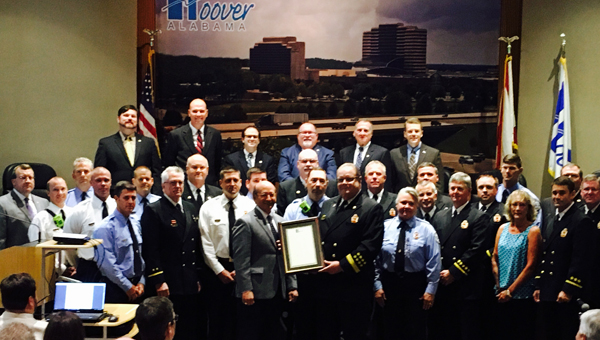 Wingate’s retirement was announced at the Hoover City Council meeting on Monday, Aug. 7, along with news that HFD had achieved the best rating possible as determined by the Insurance Services Office.

Hoover Mayor Frank Brocato and City Council President Gene Smith both spoke about Wingate and his 42 years of service.

“I want to thank you for what you’ve done for the city,” said Smith, who called Wingate a “close friend.”

Wingate joined HFD in 1975, Brocato said, at time when the department had one station and about 10 employees.

“We served alongside each other for many years,” said Brocato, a former HFD employee himself. “In 2009, he was named chief and has done just a remarkable job.

“Go by a fire station if you haven’t been there and take a look at our equipment and see how good it looks. We match any fire department in the country in terms of what we have and what equipment we have.

ISO rating is a benchmark for fire departments, Brocato said and talked about how HFD had probably a Class 7 or Class 8 rating when Wingate started.

“We were really proud when we to a Class 3,” he said. “We stayed at Class 2 for many years, which was an achievement in itself.

“Chief took it upon himself and asked his men, ‘Let’s work a little harder. Let’s see what’s out there where we can pick up a point here and a point there,’ and I know he’s proud to leave a Class 1 fire department.”

A resolution was approved in honor of Wingate and the Class 1 rating.

“It’s a really special night for us tonight,” Brocato said.

By GRAHAM BROOKS / Staff Writer HELENA–For the first time in 38 years, those in North America will have the... read more