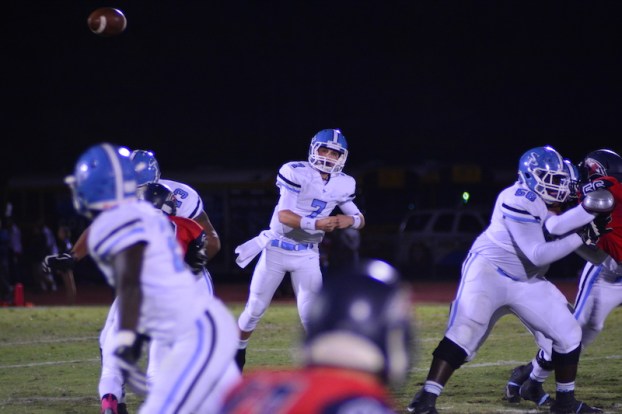 Spain Park’s Braxton Barker is excited for one last ride with his teammates and will look to help lead them to the playoffs for the third consecutive season. (File)

In four short years, Spain Park head football coach Shawn Raney has become the winningest coach in the school’s history and created a new mentality for the Jaguars heading into each season that includes the playoffs and a state championship.

During his tenure, Raney has picked up 34 wins, which is 10 ahead of the school’s first head coach Vince DiLorenzo, as well as just 12 losses. He also has taken the school to just its second state championship in history. Most memorable, however, is the fact that Raney led his team to victory over crosstown rival Hoover for the first time in school history in 2015, not just once, but twice.

I give all of that high praise to the head coach to say this; Spain Park has arrived and is a threat to compete for a state championship every season and this year is no exception.

While the Jaguars lose 26 seniors off last year’s team, they return not just 31 seniors in 2017, but 28 juniors as well, giving Spain Park an unbelievable 59 upperclassmen on the roster.

Raney does have some concerns, especially on the defensive side of the ball where he puts the majority of his focus, but has plenty of key talent back.

Defense has been the highlight for the Jags in Raney’s first four seasons only giving up 19.7 points per game in 2013, 23.8 in 2014, 10 in 2015 and 18.3 last season. Raney thinks that could change this year saying he feels like they will have to rely more on outscoring opponents than in the past, which bodes well for a Spain Park team that brings back a ton of offensive talent.

The backfield may be the most exciting aspect of the Jaguars’ 2017 team with both running back D’arie Johnson and quarterback Braxton Barker ready to run the show.

Spain Park hasn’t been the most productive offense in the state like they were during the Chip Lindsey era averaging around 25 points per game under Raney over the last four years. But with those two capable of putting up big numbers in 2017, this could be the first season under Raney the Jags will surpass the 30 points per game mark.

Hunter Howell started the majority of the 2016 season at quarterback after beating out Barker for the job, but late in the season, Barker improved and had done everything the coaches asked of him. This earned him a chance, and he made the most of it starting the last few games of the season, including a tough 21-12 playoff loss to James Clemens.

While Barker alone would be enough to keep this offense afloat, the addition of Johnson in the backfield will be instrumental. Johnson has been on the verge of breaking out during his two-year varsity career, but has sat behind one of the school’s best running backs in Larry Wooden.

Wooden has now graduated and while he had a great senior season running for 741 yards and 13 touchdowns and catching 69 passes for an additional 615 yards and two touchdowns through the air, Johnson actually led the ground attack in 2016 with 881 yards.

Barker will be helped out tremendously by Johnson, but even more so by the presence of three trustworthy receivers out wide. Senior Jalen McMillan as well as juniors Kenyon Hines and MJ Rodgers all have game-changing abilities at the wide receiver position. All three have looked strong in 7-on-7 play this summer and are speedy athletes that can go up and grab the ball.

Blocking for all of that offensive talent is Raney’s only concern on that side of the ball. Bredt Stover and Will Mullins have both graduated leaving some concern depth wise, but the return of starters Casen Browning and Ryan Campbell gives Spain park two leaders it can count on.

Jamie Simmons is another guy that will join them and standing at 6-foot-5 as just a junior, he’s the biggest guy on the line. Senior Abudl Deeb will join those three, but guys are battling for the fifth and final spot as well as a spot in the rotation.

While the offense is loaded and clearly has some of the best talent on the team, that overall quality goes to junior defensive lineman Cedric Tooson.

Last season as just a sophomore, Tooson had 24 total tackles, 11 of which were for a loss, a mark that was second on the team. He also added four sacks and one interception. Raney couldn’t talk highly enough about the junior and says while the defense is a concern overall, he can rest a little easier knowing he has a leader like Tooson on that side of the ball.

Backing the line up at linebacker will be some new faces as the Jaguars look to replace all three starters from the position. Houston Hollis was last year’s leader but graduated and takes 57 tackles and eight tackles for loss with him.

Senior Hayes Cole will be the guy looked upon to replace him and will be joined by junior Josh Wallace. After that Raney said three guys are battling for the third overall position.

Just like the linebacking corps, three starters are gone in the secondary. Kishawn Dawsey, Braxton Hall and Cameron McDonald will try to fill in at the cornerback position, while Jaden Jenkins, Clay Christian and Banks Harland will handle the safety duties.

My opinion still hasn’t changed on Class 7A Region 3. Hoover and Thompson should battle for the top two spots based simply on sheer talent at every position.

My stance all along has been that Spain Park should finish third in the standings sealing its third consecutive playoff berth. Oak Mountain, Mountain Brook and Vestavia should battle for the fourth place spot, but any one of those teams could also knock off the Jags, meaning they need to be ready to play every week as everybody in the toughest division in the state should be.

What gives me so much hope that Spain Park is just a tad bit ahead of the rest is not just the number of players on the team, but like I said with Oak Mountain’s preview, experience is everything. Despite some of these guys not having been starters, having 31 seniors and 59 total upperclassmen gives anybody an advantage from the standpoint of understanding what it takes to be great.