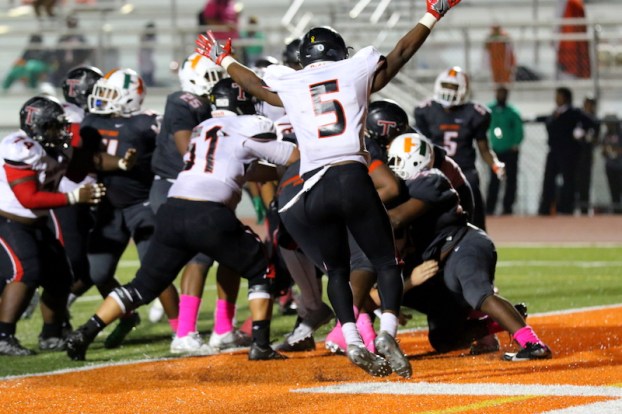 Thompson enters the 2017 season with a lot of hype surrounding the team, but it's going to take a lot of focus and determination to get as far as the Warriors want to go. (For the Reporter/Eric Starling)

Thompson is coming off of back-to-back 5-5 seasons, so why is there so much appeal surrounding this 2017 team, including a No. 3 ranking in Class 7A?

Well, to put it into perspective, the Warriors were 0-10 in 2014 before Mark Freeman took over the head coaching position the following year sending them immediately to 5-5 in 2015.

This past season, while they finished 5-5 again, Thompson lost three of its first seven games by three points or less putting them eight total points away from clinching a playoff spot and being 8-0 heading into its matchup with Hoover.

Instead they were 5-3 overall and 3-3 in the region standings when they squared off against the Bucs forcing them to need a win in order to make the playoffs. That didn’t happen as they fell 20-0, but the level of improvement each of the last two years under Freeman has been inconceivable.

One of the few keys missing on last year’s squad was consistent play at the quarterback position as untimely pick sixes were too common. The defense, however, did its job only giving up nine points per game, but the pick sixes and turnovers pushed that up closer to 18 points per game.

This season, Thompson seems to have the real deal coming in to take over the quarterback job as Taulia Tagovailoa transferred to Thompson from Hawaii in the offseason.

During his sophomore season at Kapolei High School, Tagovailoa threw for 3,919 yards, which was 66 yards short of the all-time passing record in the state, and 42 touchdowns.

According to Freeman, Tagovailoa has come in with a leadership attitude and his teammates have already bought into believing him. Those relationships have shown during the summer as the Warriors looked extremely impressive during 7-on-7 play, largely due to Tagovailoa’s connection with the receivers and running backs.

What makes this team so scary and gives them so much hype heading into the season is the return of a key playmaker at every position, which is rare in high school football.

Both running backs from a year ago are back as leading rusher Shadrick Byrd returns to the starting lineup and backup Joseph Ford also brings back a great second option.

Out wide, there is even more talent with the return of three-year starters Moe Edwards, Sam Holmes and Alondae Vasser. Joining them will be Montevallo transfer and Moe Edwards’ cousin Ahmad Edwards, who was a second team All-State selection two years ago before sitting out all of last season with an injury. Kyle Smoak will also be another trustworthy guy at the receiver position.

I could count the number of balls all five of those guys dropped during summer play on one hand. With the return of two running backs and three starting receivers as well as a quarterback capable of making all of the throws, this offense is exactly what the team needed last year to be a contender.

The reason all of that is so exciting if you’re a Thompson fan, isn’t simply because of the numbers they will put up, but because the defense is already good enough to win games without that offense giving them all of the puzzle pieces.

While Freeman says there is some depth issues on the defensive side of the ball, most of last year’s key playmakers are back for the 2017 season.

Starting up front, Mackie McNeal will anchor the defensive line at 6-foot-5, 315 pounds, much like Amari Kight, who at 6-foot-7, 310 pounds will anchor the offensive line, McNeal is a guy with many Division 1 offers and can block up the bulk of the line. He had 65 tackles in 2016 including 17 tackles for loss and six sacks.

Eric Mizell is going to join him on the line, but a battle is taking place to fill out the other lineman in the 3-4 defense.

The most exciting unit on the defensive side, and possibly the team, is that of the linebacking corps. Jalen Rayam and KJ Robertson have started at the position since their freshman season and return for one final ride on the same field.

Robertson has already committed to Troy, while Rayam finished second on last year’s squad with 125 tackles, 15 tackles for loss, five pass breakups and one fumble recovery. While they lose leading tackler Nick Mobley at the position, the return of those two guys will mend any heartbreak the Warriors may have felt.

The secondary, along with the defensive line, is one of Freeman’s biggest concerns. Thompson does return Myles Brown, who picked up 14 pass breakups and a team-high seven interceptions last year, but lose three starters as well.

Jalen Bustamante has been a strong candidate during summer competition along with Justin Carter. Bustamante has the ability to be as good as he wants to and if he emerges this season, could make the losses not seem as severe at the position.

Freeman has told me on several occasions this offseason that they are hurting and have some depth issues. Part of me brushes that off as coach-speak due to him trying to keep his team focused, but another part of me believes the coach that has always been brutally honest.

The truth probably lies somewhere in between, but if you’re the Warriors, I would listen to your head coach before myself. That being said, this team has the potential to be one of the best in school history.

Last season Thompson was a couple of plays away on offense from not only ending its 10-year playoff drought, which dates back to 2007, but being a contender for a state championship.

This season Tagovailoa seems to be the missing piece to the puzzle that has fit perfectly into place with this team. It’s the most loaded offense in Shelby County meaning even if there is some concerns defensively with depth, the Warriors will be able to do enough offensively to end that playoff drought.

Whether or not they can beat Hoover and contend for a state championship is still up in the air. I can’t give that prediction until I see this team actually prove it to me on the field. However, if they stay healthy, listen to their coaches and play as hard as they are capable of; this team can go as far as it wants to.