“As lightly populated an area as Chelsea was in the 1970s, there were few business role models,” said Janice Clark, vice-president of the new Chelsea AL Historical Society. “And here Mrs. McManus was a successful business operator in a male-dominated business.” 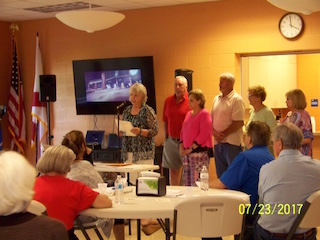 Clark was speaking of Sybil Ilene Weldon McManus, Chelsea area institution for over 20 years at McManus Shell on old Highway 280. Sybil was the most recent honoree of the new Historical Society in Chelsea. She was represented by her children (Sherria McManus Guthrie, Burlin D. McManus Jr., Theresa McManus Moore, Becky McManus Frangopoolos and Weldon L. McManus), several grandchildren, great-grandchildren and many friends.

“My mother was a wonderful woman,” said daughter Becky McManus Frangopoolos. “In the 50s she was way ahead of any women movements. She was devoted to her Mama Weldon, her brothers and sisters, the memories of her Papa Weldon, her handsome husband Berlin (Mac) McManus and her children. We children never knew we were poor. We never went without.”

“Sybil’s Shell Station was an admirable accomplishment, based upon the business sense she learned from her father,” added Clark. “Most local folks in those 20 years, knew Sybil’s Shell as a continuation of the Weldon family legacy in Chelsea.”

“Sybil was born in 1919 and was one of 13 children and the third daughter of George and Lillian Weldon,” wrote Richard Moore on behalf of the family. “At an early age Sybil worked in her father’s store, Weldon Grocery, where she developed a strong work ethic and gained business knowledge. Her sister, Velarie, also worked in the store and carried on the successful business after their father was unable to do so. Both Sybil and Velarie were long-serving business women in Chelsea.”

“At 22, Sybil married Burlin D. McManus of Westover,” continued Moore. “They had five children. Burlin died in 1955; and at 35 Sybil became a widow solely responsible for her five children. She never remarried and raised her children alone.”

“Sybil became an independent contractor with Home Decorators. In 1958 she went to work at W.A. Belcher Charcoal Pit. She worked there for about a year then took odd jobs until she opened her first service station.”

She ran several businesses (the Sinclair Station, the Niven’s Gulf Station and a Birmingham News paper route) until early 1970s.

“Then in 1973 she took over the Shell Station and ran it for 23 years until she retired in 1996. During her time at the Shell, Sybil developed many lifelong friends and gained the respect of the community. To this day people still approach her family to relate Sybil stories.”

By TONY NIVENS / Community Columnist “Here, guess what this is,” said Ron Lighty as he blew up a white... read more