Our family lives in the ideal house in the ideal neighborhood for an old marching band gal who loves to remember her days of toting a baritone sax through heat, wind, sleet, rain and even snow.

When the stadium lights come on just across Bulldog Bridge from Arden subdivision, my feet vaguely recall drill commands, and my fingers itch for those pearl keys. 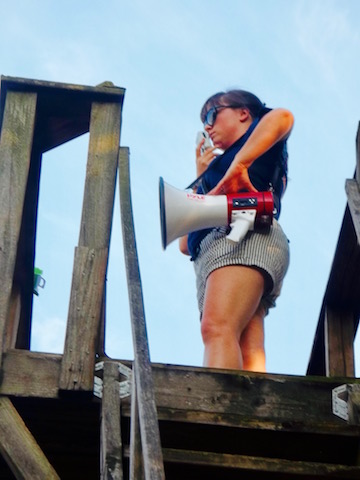 Underwood on the job, drilling the Troubadours. (Contributed)

As the drums begin their rat-a-tat rhythms with that steady boom-boom-boom of the big bass drum (apologies to Vachal Lindsay), the lights and music announce the start of another marching band season.  (I know most Alabamians call it the “football season,” but  I call ‘em like I hear ‘em.)

Thus, it was with pure delight that I caught up with the new band director of the Montevallo High School Marching Troubadours on one of her breaks between band camp and new teacher orientation.

To Lindsey Folsom Underwood, coming to Montevallo High School was a lot like coming home.  She hails from Cullman County — and, yes, she is part of that famous Folsom family.  Big Jim was her grandfather’s brother and,thus, her great-uncle. Though, bless her heart, she did not get her height from the Folsom side of her family.

Underwood picked up a heavy baton when she accepted the Montevallo job—she is the third brand new band director in three years.  That was a pretty demoralizing situation for kids who may feel that band directors think any school and any band is a step up from Montevallo.

So, it is pretty refreshing to hear:

“When I first came to the University of Montevallo, I fell in love with the place,” Underwood said. A country girl from a small rural school, she had a few misgivings about not opting for a total change of scene at a big university. However, that feeling quickly disappeared.

“As soon as I got here, it began to feel like home.”

So much like home, in fact, that she met her future husband in the pit orchestra during Homecoming, and married him on campus in front of Reynolds Hall.

She majored in music education and played the trumpet as her major instrument, assisting the band leader at Montevallo Middle and High schools along the way.

“I still advise my sorority chapter—Alpha Delta Pi,” she said.

Underwood came to the Montevallo job from Carbon Hill High School. She knows the problems facing smaller rural schools and has some plans for tackling them.

“I spend free time applying for grants for school instruments,” Underwood said. She wants to encourage families who think they can’t afford the cash outlay to put a child in band.

In the back of her mind, she is hatching plans for a Troubadour reunion, bringing back former musicians whose favorite high school memories center on band competitions and half-time shows. Many alums, she reasons, might help the Troubadour spirit thrive with tax-deductible contributions to a band foundation.

By NANCY WILSTACH / Community Columnist Maybe you feel as I do about Sherlock Holmes—captivating though Arthur Conan Doyle’s tales... read more