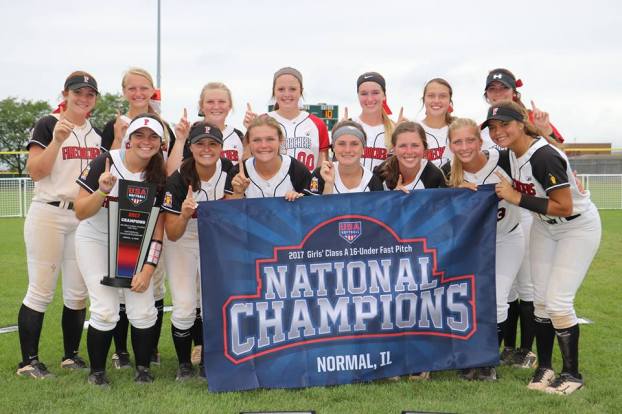 NORMAL, IL – Three members of the Thompson Warriors softball team have been competing all summer with the Alabama Firecrackers Ingram travel ball team and recently picked up a national championship.

Bailey Whitfield and Lauren Haskins, both members of the Lady Warriors’ softball team this past season, and former Chelsea shortstop Allie Miller—who is now attending Thompson as well—all became national champions when they helped the Firecrackers take down the Frost Falcons in the winner-take-all 16U National Championship game on Aug. 6.

Overall this summer the team finished with a record of 22-5 with four championships. The Firecrackers had to earn a berth into the National Championship tournament in Normal, Illinois and did so back in May.

The championship tournament featured 116 teams from around the country, but the Firecrackers weren’t phased as they went 7-0 in bracket play outscoring opponents 50-15 earning a spot in the championship series as the lone undefeated team.

In a double elimination format tournament, Frost was in a position of having to win two games to win the championship.

The Falcons started off strong taking the first game 9-7 and going up 8-0 through three-and-a-half innings of game two. With their backs against the wall, the Firecrackers banded together and lit up Frost over the next three innings outscoring their opponent 11-2 to take an 11-10 lead.

In the top of the seventh, the Firecrackers were able to get the final three outs and hold on in an intense matchup to take home the 2017 USA 16U National Championship.

Haskins, Miller and Whitfield were all three named to the All-County team this season as well as the All-State team showing their talent level. It was brought to the forefront even more during this championship run as each of them had incredible offensive performances.

Whitfield held the highest batting average at .750, while also posting a .857 on-base percentage. Whitfield is a rising senior at Thompson and not just a force at the plate, but one of the starting pitchers on the squad as well.

Haskins was close to earning the county’s player of the year honor this past spring and her unbelievable display of athleticism continued to impress for the Firecrackers.

She batted a solid .667 during the event with an on-base percentage of .692, including 14 singles, four doubles, one triple, three home runs, five walks and 12 RBIs. Haskins also scored 18 runs while only striking out on three occasions during the entire tournament.

Miller, who has been a staple on Chelsea’s roster for two years now, batted .378 at the plate with 12 singles, two doubles, one walk and 12 RBIs. She scored six runs and only struck out four times.

The impressive aspect is that all three of these girls will be back during the spring of 2018 for Thompson as Miller brings an additional athlete to the team for her senior season and both Haskins and Whitfield return to Thompson for their junior and senior seasons, respectively.

By ALEC ETHEREDGE | Sports Editor Thompson is coming off of back-to-back 5-5 seasons, so why is there so much... read more