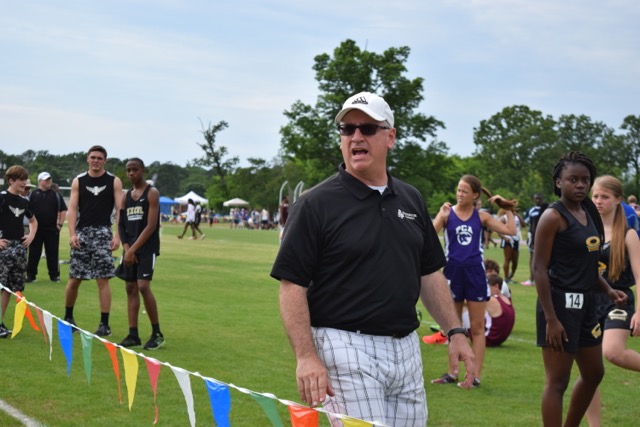 Westminster’s Dale Carrell has been named the 2017 U.S. Track & Field and Cross Country Coach of the Year in Alabama. (Contributed)

NORTH SHELBY – It was a strong sports season in 2016-17 for the Westminster at Oak Mountain Knights that was highlighted by two state championships from the girls and boys track and field and cross country teams.

A large part of those successful state championship runs was due to head coach Dale Carrell, who coaches both the boys and girls track and field teams as well as both cross country teams.

His efforts for being able to manage all four of those teams and leading two of the four to a state championship has been recognized by the U.S. Track & Field and Cross Country Coaches Association as they named him the 2017 Alabama boys high school coach of the year.

“This honor is based upon the performance of the Westminster School at Oak Mountain team throughout the 2016-17 season and is a reflection of the hard work and dedication of the student athletes, the coaching staff and the administration of the school,” read a letter sent directly to the head coach.

It’s an award that’s not just based solely on his efforts this past season, but what he has helped build at the school since the inception of both the cross country and track and field teams.

While those marks have been successful enough for the head coach, the track and field team in both the boys’ and girls’ division has arguably been more impressive over the first few years of the school’s inception.

The Knights seem to be in the top four every season in both divisions, showing the team’s continued success. The girls have won two outdoor championships in 2013 and 2014 as well as seven straight outdoor section championships. The Lady Knights have also been runner-ups in 2009, 2011, 2012 and 2016 during the outdoor season as well as an indoor runner-up finish 2017.

Darrell has done a good job of managing both teams, leading the boys’ track and field team to a tone of success as well. Like the girls, the boys have created a streak, winning nine straight outdoor sectional championships.

While they finished runner-up in both 2012 and 2015 during the outdoor season as well as runner up during the 2013 indoor season; the Knights broke through in a big way in 2017 bringing home the first boys outdoor state championship in school history.

Combined in his tenure as the head coach of all four of the Knights’ running teams, Carrell has four state championships, 11 runner-up finishes and 13 sectional championships.

“The USTFCCCA is proud to be able to bring this well-deserved recognition to (Carrell), the track and field program and the school,” the letter stated.

While it’s an award handed out on a yearly basis, there is no mistaking that Carrell’s success has been building up since 2009 establishing one of the greatest dynasties not just in one sport for one team, but two different sports and in both the boys’ and girls’ division, making him one of the best running coaches in the state.