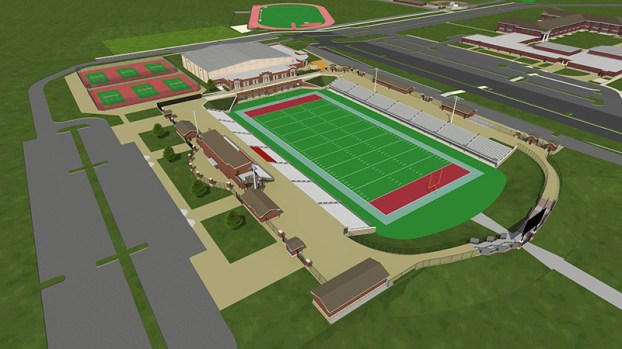 The standalone track and field complex at Alabaster's new high school, visible at the top of this rendering near the football stadium, will see major upgrades as a result of a partnership between Alabaster City Schools and Shelby County. (File)

ALABASTER – The standalone track and field facility at Alabaster’s new high school will have more amenities than originally planned, after Shelby County agreed to provide funding to make upgrades to the under-construction facility.

During an Aug. 14 meeting, the Alabaster Board of Education approved a facilities use contract with Shelby County, and approved a change order to the track facility construction project at Alabaster’s upcoming new high school.

Through the agreement, Shelby County is providing $600,000 of the $695,000 change order for the upgrades to the standalone track and field complex at the new school.

“It’s a win-win for all of our programs, and we are excited about it,” said ACS Superintendent Dr. Wayne Vickers. “It takes that from being a great track facility to being a true state-of-the-art facility.”

Shelby County Manager Alex Dudchock said the upgrades will allow the facility to host collegiate events, which could bolster the county’s tourism industry.

“There are athletic and educational tourism-based events that could take advantage of this agreement,” Dudchock said, noting the facility could also house events such as scholars bowl competitions. “You should be proud of every aspect of (the new high school), and this will give us the potential to have collegiate events there.”

ACS was already planning to construct the standalone track and field complex as a part of the athletic facilities at the new school, which is under construction between Thompson Road and Kent Dairy Road.

The new high school is set to open to students when the second semester begins in January 2018.

By GRAHAM BROOKS / Staff Writer HELENA–Traditions are special. Whether it is with family, work or elsewhere, it’s something that... read more