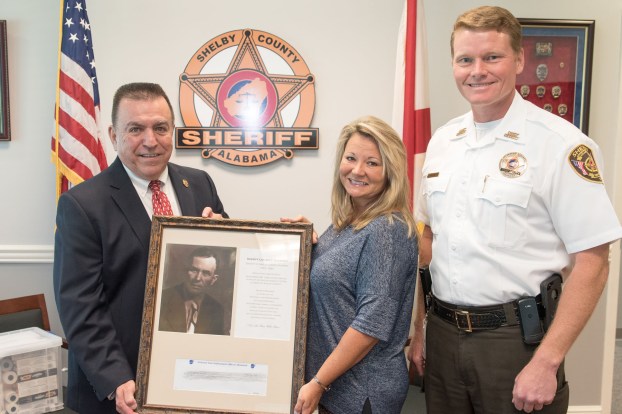 COLUMBIANA – Former Shelby County Sheriff Luther T. Bozeman was recognized posthumously as a his framed picture and a pencil rubbing of his name from the National Law Enforcement Memorial was presented to his granddaughter, Tina Johnson, by the SCSO on Monday, Aug. 14.

Current Shelby County Sheriff John Samaniego said it took extensive research before the SCSO was able to apply to have Bozeman’s name engraved on the memorial.

“We wanted to make sure all deputies in this agency who lost their lives in the line of duty are properly honored,” Samaniego said.

Johnson, who attended Police Memorial Week from May 14-20 in Washington D.C., said Bozeman’s name was also read at a candlelight vigil at the National Mall on Sunday, May 13.

Bozeman was also honored in September 2016 at the SCSO’s annual awards service.

While Bozeman passed away before she was born, Johnson said she grew up hearing stories about him and the legacy he left behind.

“He was a funny guy. He loved kids. He was definitely involved in the community and the county,” Johnson said. “Back then, the town was small and everybody knew each other. I can only imagine the impact he had. He was a great person.”

Johnson thanked the SCSO for their recognition of her grandfather and said it means a lot to her and her family.

“My family is very honored that the Shelby County Sheriff’s Office has done the research to place his name on the wall,” Johnson said. “It’s about not forgetting our lost police officers.”

Compact 2020 videos aim to educate parents on drug use prevention