COLUMBIANA – A 26-year-old Harpersville woman is facing a felony chemical endangerment of a child charge after she gave birth to a child who allegedly tested positive for multiple controlled substances. 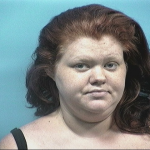 The Alabaster Police Department arrested Raven Mariah Harmon, who lists an address on U.S. 280 in Harpersville, on Aug. 12, and charged her with the chemical endangerment charge.

The charge came after she gave birth to a child at Alabaster’s Shelby Baptist Medical Center on June 27. According to Harmon’s arrest warrant, the baby allegedly tested positive for methamphetamine and cannabinoids.

The case was then investigated by the Shelby County Department of Human Resources before it was turned over to the Alabaster Police Department, which brought the criminal charges, said APD Lt. Grant Humphries.

Chemical endangerment of a child is a Class C felony, and is punishable by up to 10 years in prison upon conviction.

Harmon was released from the Shelby County Jail after posting a $15,000 bond the same day she was arrested.

She is now set to appear in Shelby County District Court on Aug. 30 for a preliminary hearing in front of Judge Daniel Crowson at 8:30 a.m.

By GRAHAM BROOKS / Staff Writer HELENA–Traditions are special. Whether it is with family, work or elsewhere, it’s something that... read more