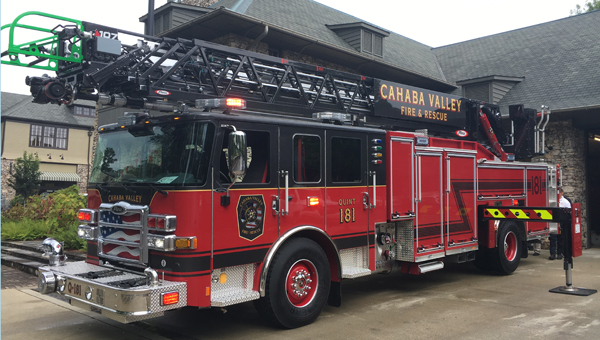 NORTH SHELBY – A new ladder truck acquired by the Cahaba Valley Fire Department is the first of its kind in Alabama and will allow firefighters more flexibility as they respond to structure fires.

The old unit will remain with the department and could be used as a reserve or at a station where it would see less use, Gaither said.

A committee of seven people performed pre-planning and then visited the Pierce Manufacturing in Appleton, Wisconsin for three days.

“Two of those days are going over everything you want on the truck,” Gaither said and gave as examples lights, graphics, engine size and suspension.

The CVFD representatives pored over 145 pages of specifications before construction of the apparatus began.

“They don’t pre-build anything,” Gaither said.

The new truck was ready after about 13 months of manufacturing and about a week of inspections at a Pierce service center in Pelham.

CVFD’s old ladder truck featured a 75-foot aluminum ladder, while the new apparatus has a 107-foot steel ladder with a 750-pound tip load.

“A 75-foot ladder won’t reach a three-story building sometimes because of setbacks and where you have to park,” Gaither said.

New engineering on the Pierce Ascendant Ladder allows Quint 181 to carry the ladder on a single-axle frame, which was previously not possible.

From the time the parking brake is applied, the ladder can be extracted in 30 seconds, Gaither said.

Quint 181 also features red, white and blue rung lighting on the ladder; and cameras and lasers that show where the stabilizer jacks will fall, making it possible to park the apparatus in a tight spot and have the jacks fall between two parked cars.

NORTH SHELBY – Oak Mountain Elementary School was surprised with a grant that will allow school officials to showcase its... read more