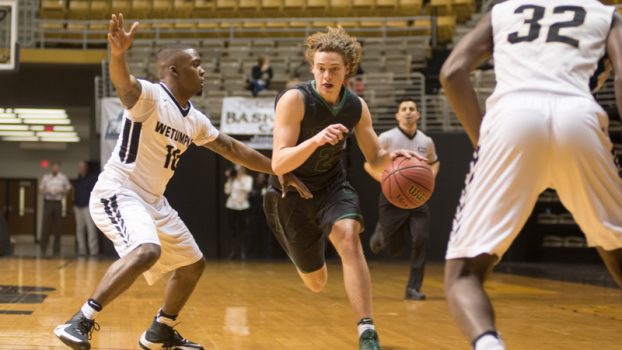 Justin Allison will look to prove size doesn’t matter on the basketball court by continuing to be one of the best point guards in the state during his senior year at Pelham. (File)

PELHAM – Standing at 6-feet tall, 160 pounds, with long blonde locks of hair flowing to just above his shoulders, Justin Allison isn’t a guy that intimidates you with his look on the basketball court, but it’s a deceptiveness that he uses to his advantage.

Playing the game since the second grade, Allison has always been that undersized guy that a lot of people don’t respect, but every step of the way that’s been something that fuels a burning desire inside him to prove everyone wrong.

“Being shorter has by far been the most difficult challenge for me playing this game,” Allison said. “It’s been an obstacle I’ve had to overcome from day one, so I just fight every day to be the best I can be and make my teammates the best they can be.

“I just block out that noise and tell myself that I am good enough to play this game, then I go out there and prove it.”

The battle really came to a boiling point in the last few weeks, when Tusculum College—Allison’s only offer coming out of his junior season—retracted its offer after new head coach Nick Pasqua took the reins.

“They told me I was too small to play the style of defense they wanted to play,” Allison said. “My offensive ability apparently wasn’t the problem because they said they loved that part of my game, but I just didn’t fit the size they needed to run their defensive scheme.

“I was definitely disappointed when I heard the news, but at this point it’s just given me a new desire to come back even stronger for my senior year.”

That’s a task Allison has taken to heart since the end of this past basketball season not taking a break the majority of the summer. While kids were sprinting out of school doors for summer break on the final day of school, Allison sprinted straight to the gym and worked for several hours on his game.

That’s a trend that continued the remainder of the summer, shooting 100 3-pointers, working on dribbling drills, shooting intermediate shots and practicing layups every day; along with competing on the AAU circuit with his Pro One teammates.

“That was a big focus this summer,” Justin’s dad Jeff Allison said. “We wanted to make sure he was working on every aspect of his game, especially those mid-range jumpers, which is a lost art.”

Allison, a first team point guard on the All-County team in 2016-17, was already strong enough before putting in all of that work averaging 19 points, 4.5 rebounds and four assists per game this past season. Those numbers established him as one of the best junior point guards in the state last season as he helped lead the Panthers to the Elite 8 of the 6A playoffs.

On three different occasions last season, now Alabama player Alex Reese was out of the lineup and Allison had his chance in the spotlight. He took advantage and made his name known early in the season as one of the top point guards in the state by scoring 27 points in their season-opening win against Pinson Valley, 29 points in a win over Homewood and 30 points in a loss to 7A Final Four team Vestavia.

After looking at those numbers, it’s almost mind boggling as to why someone wouldn’t want the young man on their team, but the relentless hours of hard work he has put in to become even better this summer can be a scary thought for his senior year.

The work has already shown off this summer on the AAU circuit as he averaged 12.5 points, 4.5 assists, 3.5 rebounds and 1.5 steals per game as a member of the Pro One team. With Pro One, he played alongside and against some of the best players from around the country.

Heading into his senior season with the Panthers, Allison hopes his hard work this offseason will pay off and has some focuses that he hopes will benefit more than himself on the court.

“I do have individual goals such as proving I can play against anybody at any time,” Allison said. “But overall this year, I want to make sure this team grows as people and that we are the hardest working team of anybody in the state. We’ve lost a lot of guys, but I just want be the best leader I can and help my teammates get another area championship.”

Allison more humbly talked about another goal of his, the 1,000-point mark. He is just 17 points shy of that career accomplishment; something he will most likely reach in the first game of the season.

While he has all of these goals and aspirations for himself as he looks to get a college offer as well as helping lead his teammates, Allison also knows this is his last season suiting up under coach Joel Floyd and playing in front of the Panther faithful.

“I honestly don’t want to leave Pelham,” Allison said. “This community is so close and everybody supports one another that it is such a special place. It hasn’t sunk in quite yet since the season is still a few months away, but I just want to enjoy this last ride and hope it doesn’t go by too fast.”

Allison is the youngest of three siblings that have been standouts at Pelham, his older brother Zach was a basketball standout at the school, while his older sister Jordan was a track star for the Panthers.

“It’s going to be a very emotional year,” Jeff Allison said. “We’ve become so close to so many people in the community through the years, and Kim Kiel has given us so much freedom to be a part of all of our great athletic programs that knowing this is the last year we will get to experience it is going to be very emotional.”

Allison will yet again be one of the best point guards in the state during his senior season and is sure to impress plenty of colleges along the way that won’t be blinded by his size, but instead see a player that works harder than anybody on the court to prove they belong.