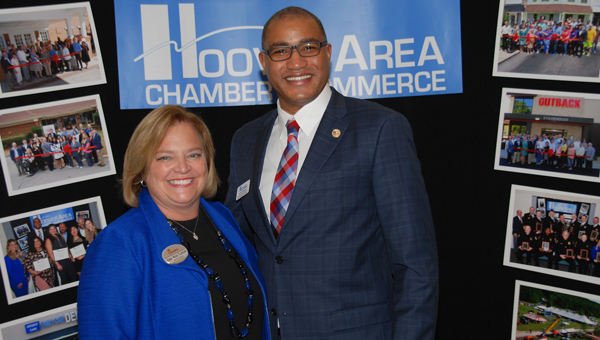 HOOVER – The woman who literally wrote the book on Chick-fil-A’s famous “It’s my pleasure” phrase spoke to the Hoover Area Chamber of Commerce on Thursday, Aug. 17.

Dee Ann Turner, Chick-fil-A’s vice president for enterprise social responsibility, began her presentation at the monthly Chamber luncheon with a story about the operator of a new restaurant who called a company president after the first day of operation because the business was out of chicken and its manager quit.

“I am so glad you’re there to handle that,” the president said, according to Turner, before turning out the lights and going to bed. “Can you imagine being in that situation and being able to do that?”

The story was an example of Chick-fil-A’s commitment to hiring the right people, training them for success and allowing them to do their jobs, Turner said.

Turner, a top corporate executive, was invited to speak by luncheon sponsor David Jackson, who owns Chick-fil-A restaurants in Hoover.

Turner’s career with the company began in 1985 as an administrator in the human resources department. She was selected as Chick-fil-A’s first female officer in 2001 and has led various areas of the business including human resources, franchisee selection, culture, learning and development, talent management and talent acquisition.

Turner’s first book, “It’s My Pleasure: The Impact of Extraordinary Talent and a Compelling Culture,” became a best-seller.

Chick-fil-A’s corporate purpose—“To glorify God by being a faithful steward of all that is entrusted to us and to have a positive influence on all who come into contact with Chick-fil-A”—was developed when the company was experiencing slumping sales and heavy debt.

“Since 1982 (when the purpose was adopted), Chick-fil-A has never had a slump in sales,” Turner said.

The company’s core values are excellence, integrity, loyalty and generosity.

An example of “second mile” service was a local Chick-fil-A passing out about 1,000 chicken biscuits to stranded motorists during the January 2014 snow and ice storm, Turner said.