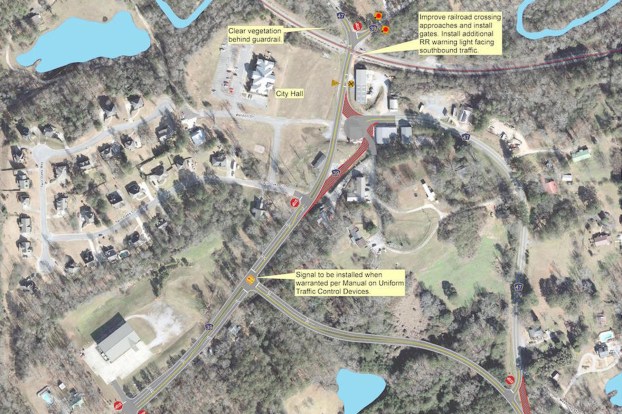 A conceptual drawing from Sain Associates, Inc. features the changes Shelby County is proposing to make to the intersection of Shelby County 39 and Shelby County 47 in Chelsea. (Contributed)

CHELSEA – Shelby County gathered input from Chelsea residents at a public hearing after the city’s regularly scheduled council meeting on Tuesday, Aug. 15, about proposed redesigning of the intersection of Shelby County 39 and Shelby County 47 within the city limits.

According to Shelby County Engineer Randy Cole, the county performed a study on road conditions in that area through an Apple Grant they received and hired Sain Associates, Inc. to create a rendering of the potential redesign.

The rendering suggested plans to clear the vegetation behind the guardrail at the intersection. At the nearby railroad tracks, the county plans to improve crossing approaches, install gates and install a warning light facing southbound traffic.

While the intersection will eventually need four lanes, Cole said that project is not currently financially feasible.

Cole said the main objective of this project is to eliminate safety issues for motorists near the area.

“I have said publicly that the intersection of 39 and 47 in proximity to the railroad tracks is one of the most dangerous situations,” Cole said. “This intersection is very close to the middle school. Any disruption to traffic could cause vehicles to possibly stop on the tracks.”

During the public hearing, representatives from Sain Associates stood at each corner of the council chambers and answered questions and addressed concerns from residents, who were able to submit a form voicing their opinions.

Chelsea resident Kim Bradley, who runs a nonprofit organization based off Shelby County 39, said she is concerned about the timing of the project.

“We want a time frame that doesn’t inhibit our organization,” Bradley said. Bradley said she also hopes the project will eliminate some of the heavy traffic that frequents the area.

“Traffic is hectic. If we want to go to the post office, we don’t go after 2 p.m. because we know it would be too difficult to come back after,” Bradley said.

Cole said the initiative to gather input is Phase One of the overall plan, and the county will use the data gathered to determine the project’s next step.

“I hope this project serves the city well for a reasonable period of time,” Cole said.