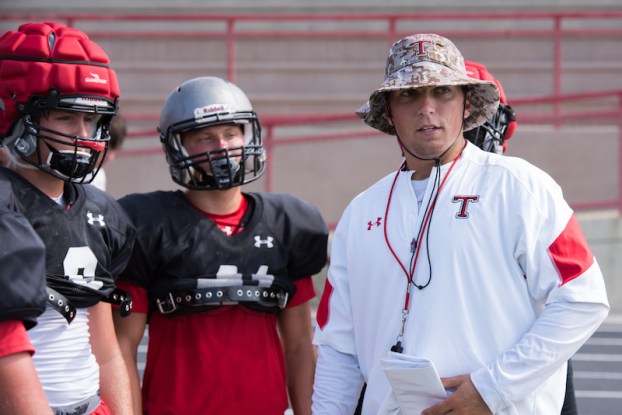 Jake Ganus coaches during a practice at Thompson as the Warriors prepare for their first game of the season on Friday, Aug. 23, against Hapeville Charter out of Georgia. (Reporter photo/Keith McCoy)

The Return: Jake Ganus back where he belongs

Timing is one of the most underappreciated aspects in life. Our lives take shape by certain events at certain times leading us down the path we are meant to take. It’s something former Chelsea Hornets, UAB Blazers and Georgia Bulldogs linebacker Jake Ganus doesn’t take for granted, knowing it led him to a dream that wouldn’t have been possible without the perfect timing.

Ganus started making a name for himself at Chelsea High School during his senior season when he started at quarterback, running back and linebacker for the Hornets racking up the Shelby County Player of the Year honor as well as a spot on the All-State first team.

His biggest and best offer coming out of high school was UAB, so he took the opportunity and ran with it. Ganus continued to prove he was one of the best players on his respective team and earned a spot in the starting lineup quickly before making a huge impact during his junior season in 2014.

Still though, to this point —aside from his success — everything was going too smoothly and nothing had happened to test him or his mentality, but soon enough that would change.

On Sunday, Nov. 30, 2014, the day after UAB’s final game of the season at Southern Miss, a 45-24 win, Ganus was getting treatment when news broke that the Blazers were planning to shut down their football program effective immediately.

“I was getting treatment in the back and heard my teammates in other room screaming and immediately knew something was up,” Ganus said. “Once the news made its way back to me in the treatment room, I was in such disbelief and completely blindsided.”

Not just the players, but the coaches were completely caught off guard, leaving everybody in the dark. For two drawn out and tumultuous days, they could all only fear what was next, staying glued to their phones hoping the news was nothing short of a complete fabrication or that someone higher up would have a change of heart considering so many lives were going to be affected.

Finally, two days later on Tuesday, Nov. 2, the coaching staff called a meeting to officially announce the end of the UAB football program.

“At that point we pretty much had accepted the inevitable after watching the news and hearing all of the talk about us,” Ganus said.

While the unfortunate news led to protests among UAB students, alumni and fans; the players were forced to figure out what was next. Like a branch of a major corporation shutting down and leaving many without jobs, 87 non-senior members of the Blazers football team had their job snatched right out from under them.

“The first thing that went through my mind after hearing the announcement was, ‘Who is going to want a transfer that only has one year of eligibility remaining?’” Ganus said.

Little did he know in that worrisome moment that God’s perfect timing was about to take over his life and send him down the path that led to his future.

Ganus was coming off a season where he led the Blazers in tackles with 70 and tackles for loss with 16.5, and schools took notice. During the next week, Ganus said it felt like he received 50 college football offers from teams all over the country as one of the hottest transfer options there was.

“It was a bad situation, but at the same time, I got to feel like a big-time college recruit for the first time,” he said. “Coming out of Chelsea, I didn’t get that kind of attention, so it was honestly kind of nice. That being said, I was still bitter about how everything went down.”

Ganus ended up making the decision to join head coach Mark Richt and the Georgia Bulldogs for his last season of eligibility, but it was a decision that came with a lot of skepticism.

“I feel like I was looked at as a charity case when I first got there,” Ganus said of his early days in Athens, Georgia. “No one thought I could go in there and compete for a starting job, but I just controlled what I could control.

“My dad always taught me as a child that I can only control myself with the attitude and effort I give. I just attacked everything head on as a challenge and put myself in a position to have success.” 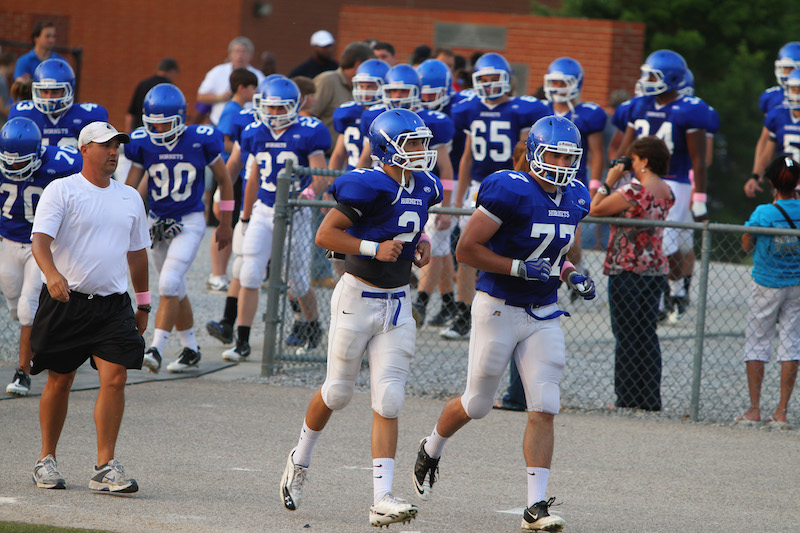 Ganus, No. 2, runs onto the field during his senior season at Chelsea where he played quarterback, running back and linebacker. (File)

Ganus said he was originally named to the second string and never looked back as his Dawg days took off from there. During the offseason, he worked his way up the depth chart and eventually went on to start in every game that season for Georgia.

By the end of the year, he had not only gained the respect of his teammates, who couldn’t help but rave about the guy every opportunity they got, but Ganus also ended up leading the Bulldogs in tackles.

“I share my story with my guys all the time, not because I’m special in any way, but because I had it instilled in me at a young age by my dad how to do things the right way and that hard work would pay off,” Ganus said.

Another blessing in disguise of joining the Bulldogs’ program during the fall of 2015 was one of the most special moments of his life on Saturday, Sept. 9, after Georgia defeated South Carolina 52-20.

With some of the crowd still filing out of Sanford Stadium and the band still playing in the background, Ganus walked arm-and-arm with girlfriend Peyton Thomas to the middle of the famous G on the 50-yard line where he got down on one knee and asked her to spend the rest of her life with him.

Before he even made it down to his knee, Thomas’ grew a smile across her face and immediately started nodding her head yes.  The two have since been married and started the next phase of their lives back in Alabama.

After the completion of the 2015-16 year at Georgia, Ganus attempted a stint in the NFL with the Minnesota Vikings, who picked him up as an undrafted free agent. He lasted all the way up to the last cut of players on Sept. 3, 2016, before Minnesota decided to cut ties.

But timing, yet again, was on Ganus’ side. After his dream of becoming an NFL player fell by the wayside, he decided to move back home to Birmingham and finish his degree where it all started, UAB.

While attending the university, Ganus reached out to his former coach Bill Clark and asked if he could join the coaching staff in a sort of shadowing position. Clark was on board and Ganus’ coaching career had officially begun.

“It’s always been a dream of mine to coach at some level after my playing days were over,” Ganus said. “I had my struggles accepting I was done playing the game, but knew I wanted to jump into coaching immediately.”

It didn’t take long for local high schools to pick up on Ganus being back in town, and that’s when head coach of the Thompson Warriors, Mark Freeman, came calling.

“Coach Freeman reached out to me in late March and asked if I wanted to be a part of their program,” Ganus said. “At first I struggled with whether or not I wanted to be a college coach versus a high school coach.”

It didn’t take long for him to realize what the better route was. With his wife’s new business, ThirtyOne Boutique, headquartered in the Alabaster area and the atmosphere of having his family close by led to him taking the coaching job at Thompson.

“College coaches just put in so much time and work, which I respect, but I like where I’m at and want to stay in this general area to be around my family and wife as often as I can be,” he said. “It was just another timing thing that fit in perfectly. It’s all about God’s timing and this is what he wanted me to do.”

Ganus said his dream is to be a high school head coach somewhere in this area, but that’s the furthest thing from his mind right now.

“I’m just so appreciative of coach Freeman giving me this opportunity and what he is doing at Thompson for these kids is so special,” Ganus said. “I’m glad I get to be a part of it and have an impact on these guys.”

He couldn’t have picked a better time to join the Warriors as they have one of the best rosters in school history, including two of the state’s best linebackers, which is the position Ganus will coach.

For now, Ganus is excited for what’s to come this season and to continue seeing the timing of his life fall into place. Whether it’s playing Xbox and eating pizza with his linebackers or on the field coaching his first group of guys, Ganus knows he wouldn’t be in this dream situation were it not for everything that happened over the last three years.