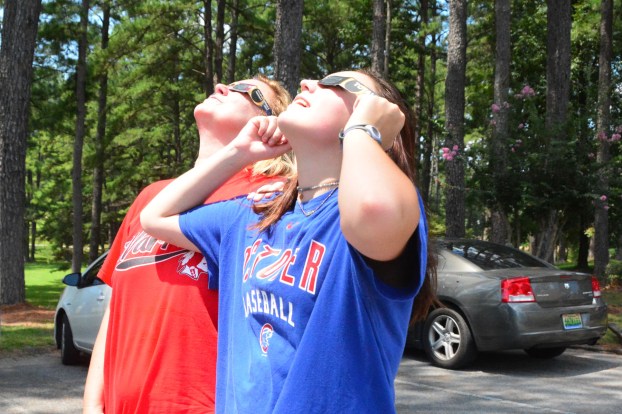 Locals “explore the eclipse” in Alabaster

ALABASTER – Over 100 people gathered at the Albert L. Scott Library at around noon to watch the one of the most exciting astronomical phenomenon of the century on Monday, Aug. 21.

According to Public Services Librarian Carol Smith, the library gave out over 100 ISO compliant sunglasses to allow members of the community to safely watch the solar eclipse, which was partially visible from Alabama and totally visible in other parts of North America.

“We thought it would be a great thing to offer to the community,” Smith said.

Smith said some residents had started lining up in front of the library at around 6 a.m. and they had run out of glasses before the event had officially started.

Smith credited the high turnout to the eclipse’s high level of media coverage and the spread of information on the Internet.

“This is the first total eclipse that’s hit North America since the Internet age,” Smith said.

In addition to giving out sunglasses, visitors enjoyed moon pies and a live stream of the event was held inside the library’s conference room. “Space bingo,” Legos and coloring sheets were available for kids.

Alabaster resident Sally Owen said she had been waiting outside of the library since 5 a.m. to get sunglasses for her grandchildren.

“I just wanted them to experience this,” Owen said. “ I know it’s supposed to happen again, but it will be years.”

As the eclipse began, Alabaster residents Tina and Kaitlyn Garcia said they were excited to see what would happen once the moon eclipsed about 90 percent of the sun.

“I want to see how dark it gets,” Tina Garcia said.

“It already looks like someone took a bite out of it,” Kaitlyn Garcia said.

While the sky only darkened a little during the eclipse, up to 91.7 percent of the sun was covered from Alabaster and other cities in Shelby County, according to an interactive map on Timeanddate.com. As of 3:45 p.m., the eclipse was no longer visible from the Alabaster area.

Mayhem on the Mountain draws crowd to OMSP