Westminster XC has loaded rosters for 2017 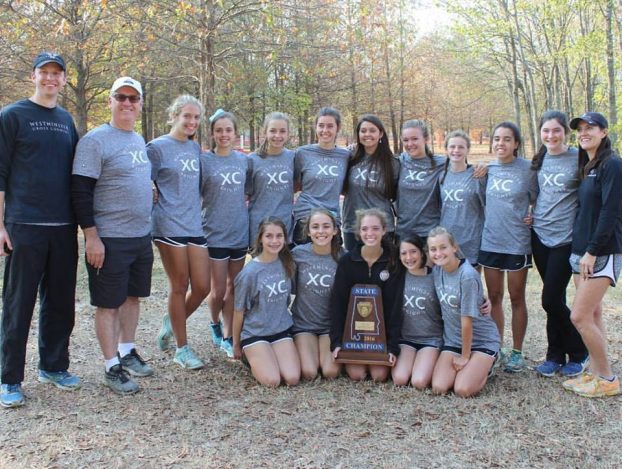 The Westminster boys and girls cross country teams both return several of the best 1A/2A runners in the state as the girls look to repeat as state champions and the boys look to improve on their third place finish. (File)

It’s a strong mark for the girls to make as they return almost everybody from a team that won the 2016 1A/2A state championship. This year, the Westminster girls team should almost assuredly be the No. 1 team heading into the season and the favorite to repeat as state champions.

They’ll be led by senior Sarah Kate Lipperd and freshman Hallie Porterfield, both of whom were ranked in the top 10 of returning runners in the classification.

Lipperd finished in seventh in the state championship meet last year, just one spot ahead of Porterfield in eighth as just an eighth grader.

Senior Camilla Lemons and sophomore Arden McCullough are top 15 returning runners as well. Katie Hoaglund, younger sister of Maddie Hoaglund, will return for her sophomore season as well, along with Rachel Faulk, both of whom are ranked in the top 30.

Bekah Anderson is the last returning runner in the top 50 for the Lady Knights, while Courtney Callahan, Izzy Giddens, Lauren Hoaglund, Caroline Callahan, Hannah Richburg and Anna Caroline round out the 13 girls in the top 100.

The Westminster boys team also had a strong showing in the 2016 state championship finishing in third just behind Cold Springs and St. Bernard.

With six returning runners in the top 100, five of whom are in the top 30, the Knights should be able to make another strong run at a state championship in 2017.

Three of those returnees will be in the top 10 heading into the season starting with Hunter Wright at No. 6. Just behind him are John Porterfield at No. 7 and Mitchell Cook at No. 8.

Wright is considered the anchor of the team and will only be a freshman on this year’s team. Porterfield and Cook are both juniors that add a little more experience.

Just outside of the top 10 was senior leader Pierce Moffett, who is ranked No. 11 in the 1A/2A division heading into his final season with the Knights.

Sophomore Campbell Lemons rounds out the top 20 at No. 18 and junior Cooper Reynolds came in at No. 28 as the last of the five in the top 30. The final runner ranked was sophomore John Richardson, who is projected as the 63rd best runner in the classification.

With that level of returning talent for both teams, Westminster’s boys and girls cross country teams should both be considered top 3 teams heading into the 2017 season and strong contenders for the 1A/2A state championship come November.