OMHS senior the latest in family full of Eagle Scouts 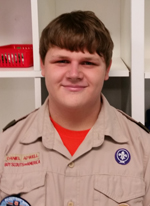 “It’s kind of a family thing, so I wanted to keep going with it,” said Daniel Adwell, who has been involved with Boy Scouts since he was in the first grade.

Adwell’s mother, Janet Adwell, worked in the 4- and 5-year-old classes in the preschool program at Meadow Brook Baptist, and wished at the time that the classrooms had cubbies.

When it was time to decide on an Eagle Scout project, Daniel Adwell and his family remembered the need at the church, where he is a member.

“We went to the preschool director and asked if there was anything we could do for the preschool,” Adwell said.

The project was completed in about two weeks during the summer of 2016, with Adwell working all day with the help of his father and three friends.

“When I started working on it, that was the entire focus and we knocked it out really quickly,” he said.

The Eagle Scout rank was bestowed on Adwell during an Eagle Court of Honor ceremony held in June at Christ Church off Caldwell Mill Road, the home of Boy Scouts Troop 5, of which Adwell is a member.

This summer, Adwell participated in Sea Base, a week-long Boy Scouts trip.

With six other Scouts and two adults, Adwell sailed and snorkeled around the St. Thomas/St. John area of the Caribbean Sea, learning from a captain who sails professionally.

“You do everything someone who sails for a living would do,” Adwell said.

At OMHS, Adwell plays trombone in the Spirit of Cahaba Marching Band, is an honor student and member of the Math Team, Latin Club, National Honor Society, Mu Alpha Theta and the Apologetics Club.

HOOVER – Nich Carlisle has taken it upon himself to recognize veterans and look out for classmates in need—though he... read more