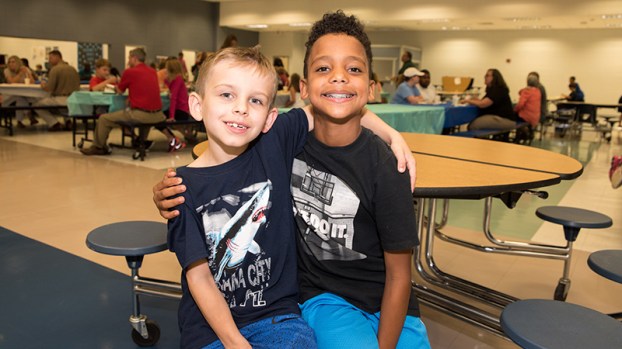 Helena Intermediate School third grader Brodie Powell, left, will be featured on a national television show because of his ability to recite every U.S. president in order. (Reporter Photo/Keith McCoy)

HIS third grader to be featured on national television show

HELENA–If asked to do so, not many adults could name every single U.S. president in order on the spot.

Helena resident Brodie Powell is not an adult. In fact, he is a third grader at Helena Intermediate School, but possesses a rare talent that will be shown to a national TV audience.

Powell will fly to New York City with his family the week of Aug. 28, where he will be featured on the “Harry Connick Jr. Show” in front of a national audience.

Powell has the ability to recite every single U.S. president in order with lightning speed. In addition to this ability, he can also name several facts about many of the U.S. presidents.

Rachael Starnes said her and Powell would pack their bags and head to New York on Tuesday, Aug. 29, where Powell is set to be filmed on Aug. 30, on the set of the show.

Starnes said Powell got the opportunity after submitting a video reciting all the presidents in order to producers of the show.

Once producers saw the tape, they conducted a face time interview with Powell and subsequently chose him to come be on the show.

Powell became interested in history and the U.S. president’s during his time at Helena Elementary School.

“He was Abraham Lincoln last year for the living president’s day at Helena Elementary School and ever since then he’s been so interested,” Starnes said. “He catches on so quickly and his memory is incredible.

Starnes said they would be in New York from Tuesday through Saturday.

Starnes said she isn’t sure when Powell’s segment will actually air on TV but will be excited once she finds out more details and the date in which it will be shown.

The Harry Connick Jr. show can be seen in the Birmingham market on ABC on weekdays at 3 p.m. and midnight.

For more information on the show, visit Harrytv.com.