COLUMBIANA – Several Columbiana business owners were recognized for their contributions to the community at Alabama Main Street Day on Saturday, Aug. 12. 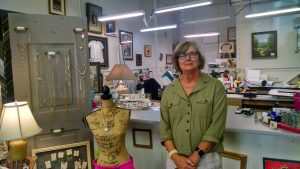 “Her heart has not been in her business, Busy Hands, but in this town,” Columbiana Main Street Director Bragan Feldman said.

According to Feldman, Cook was instrumental in establishing Columbiana as a designated Main Street Alabama community.

“There is only one Linda Cook,” Feldman said. “She is Columbiana and what makes Columbiana great.”

Jim and Lisa Davis, owners of Davis Drug Co., received the Architectural Design Award for their “historic preservation and redesign of the Davis Building,” which houses the Davis Gift Shop and the Farm Company.

“During the fall of 2016, Jim Davis saw the vision that Main Street Alabama had for his vision exterior, their vision became his vision,” Feldman said. “The building is now one of the most eye catching and visible buildings in Columbiana. The historic architecture that was able to be preserved and now proudly displayed is a true asset to the community.”

FROM STAFF REPORTS Parents in need of assistance with Christmas gifts for their children ages 12 and younger may apply... read more