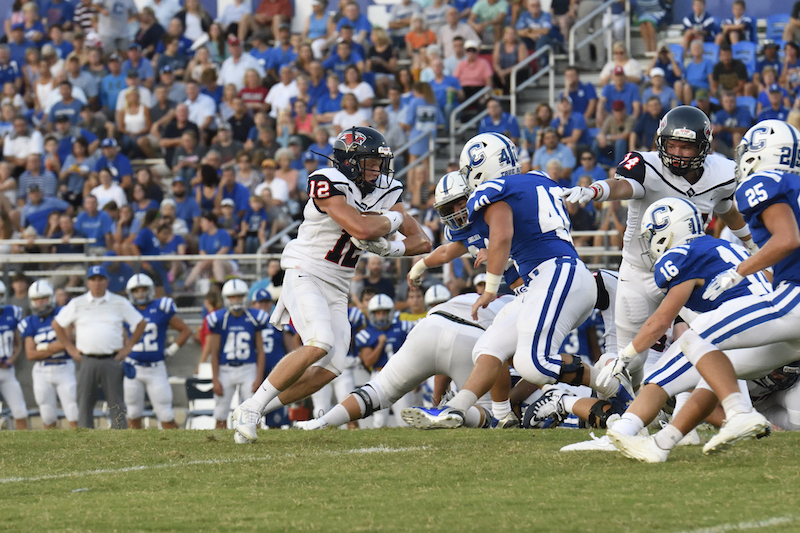 Luke Percer was the leading offensive playmaker in the game with 77 rushing yards and three touchdowns as he helped lead the Eagles to a 21-10 opening-night win over Chelsea. (For the Reporter/Barry Clemons)

CHELSEA – Last year Chelsea and Oak Mountain combined for 82 points as the Hornets came out of Heardmont Park with a 49-33 win over the Eagles. Fast forward to Aug. 25, 2017, and the two met again to open the season, this time at Chelsea. Subtract 51 combined points from that 82 and you have the 31 points the two put up to open the new season.

From the very start of the game, it was sloppy offensively with very few passes and a lot of short-yardage runs. The ground-and-pound game-style suited Oak Mountain’s option attack as they were able to take advantage of a sloppy game to grab a 21-10 revenge win at Chelsea to start the 2017 season 1-0.

“It was a typical first game on both sides,” Oak Mountain head coach Cris Bell said after. “I didn’t think we were very crisp, particularly offensively, but we were able to come out on top. It feels a whole lot better tonight than it did a year ago.”

Both teams had a ton of question marks coming into the game as the Hornets were looking to replace 406 combined yards and four touchdowns with the loss of quarterback Matt Marquet and running back Zalon Reynolds.

The Eagles, also had some concern at the quarterback position with the loss of Wyatt Legas, leading to Connor Webb moving over from the defensive side of the ball. Oak Mountain also needed some answers defensively after giving up 49 in this game a year ago.

While the game ended with just 257 yards for Oak Mountain and 165 for Chelsea, it started fast on Oak Mountain’s first drive of the game.

The Eagles opened the game on a 12-play, 76-yard drive that lasted 6:17 and ended with a Luke Percer touchdown from one-yard out to put Oak Mountain up 7-0 midway through the first quarter.

“That was a solid drive early in the game, but then we got sloppy by missing assignments and reads,” Bell said.

It became immediately evident following Chelsea’s next three-and-out that with Oak Mountain’s option style offense and the Hornets lack of downfield threat, that this game was going to be a hard-fought game in the trenches with a fast-running clock and very little offense.

Oak Mountain did however put together another strong drive shortly after thanks to a 10-yard punt by Chelsea that set the Eagles up on the Hornet 28-yard line.

Just like the previous turnover by Chelsea, Oak Mountain was unable to convert. They drove down to the 5-yard line, but the drive stalled before the Eagle’s short field goal attempt was deflected wasting the short field.

The Hornets finally caught their first break of the game with 5:40 to go until the half thanks to a defense that was determined to keep Chelsea in the game.

“I thought our defense played especially hard tonight,” Chelsea head coach Chris Elmore said. “They were put in adverse situations all night and kept battling. We probably shouldn’t have been in the game in the fourth quarter, but we were because of them.”

On first down from midfield, Oak Mountain fumbled the ball leading to their first turnover of the game and great field position for Chelsea. This marked the first time we saw Chelsea quarterback Turner Griffin take over for starter Alec Little and it seemed to spark the team a little.

The Hornets were able to put together a 12-play drive that started at their own 45 and move into field goal position. The negative was that in 12 plays, Chelsea only moved to the Eagle 35, but the positive was Colby Lambert nailing a 43-yard field goal to cut the lead to 7-3 at the half.

Whether halftime adjustments were made or not during the break didn’t show early in the second half as the two teams came out of the locker room and combined for five straight three-and-outs.

While there was no offense to speak of, Oak Mountain was clearly winning the field position battle and it finally caught up with the Hornets.

After another bad punt, the Eagles started their third drive of the half on the Chelsea 34-yard line. Six plays later, after solid runs by Webb and Connor Wilson, Luke Percer pounded in his second touchdown of the night, this time from two yards out to put Oak Mountain up 14-3 with 4:18 remaining in the third.

Chelsea’s offensive woes continued going three-and-out on its next drive. After punting it away, Oak Mountain faced a third and five in which another bad exchange led to a fumble that was recovered by Chelsea’s Hunter Offord putting them on the Eagle 32 and in great shape again.

But as became the theme on the night, the Hornets shot themselves in the foot. First by facing a third and 32 and after a pass interference gave them a first down, they proceeded to not convert on a third and three before missing a 31-yard field goal to get within one possession.

Oak Mountain took advantage and went on a 12-play drive that started on their own 20 with 8:50 to play in the game and ended with Percer’s third touchdown of the game from inside the 2-yard line to put the Eagles up 21-3 with 1:35 left.

Chelsea finally threw the ball with no other choice on the ensuing possession and completed a 40-yard pass before Griffin tossed a touchdown to Lando Nichols with 10 seconds remaining to make the final 21-10.

Percer led Oak Mountain with 18 rushing attempts for 77 yards and three touchdowns. Wilson also had a solid game for the Eagles in the backfield running for 75 yards on 16 attempts as Oak Mountain ran for 221 yards.

“All three of our backs have the ability to do that on any given night,” Bell said. “I thought we were going to be able to break a few more than we did tonight.”

Alec Little was 8-for-10 for 81 yards and a touchdown as the starting quarterback for Chelsea while Turner Griffin was 5-for-5 for 32 yards.