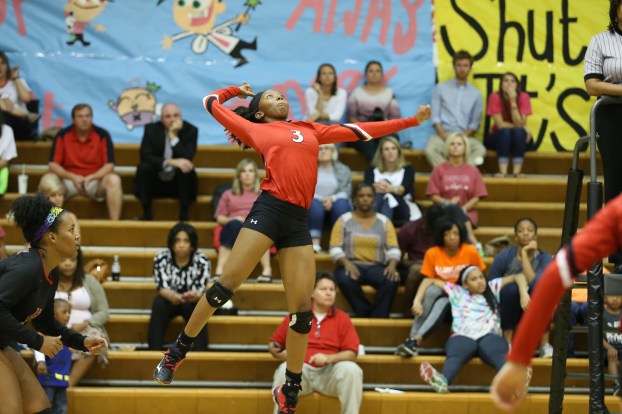 Junior right side player Kindall DeRamus will be one of eight juniors on this year's Thompson volleyball team as they look to improve on last year's 12-25 record. (Contributed)

ALABASTER — Last year on the volleyball court, the Thompson Warriors struggled to find an identity and leadership never emerged leading to a dreary 12-25 overall record. In 2017, however, that sentiment has changed as head coach Judy Green has loved the work her team has put in during the offseason.

“Last year was a pretty difficult and challenging year for Thompson volleyball,” Green said. “We had moments of greatness, but just had a really difficult time being consistent with how we played the game. I Felt like toward the end of the season we were playing our best volleyball of the season, but we just never could come together as one and be selfless.”

There were many reasons for the Warriors’ up and down season, but Green always came back to the leadership aspect.

“We were both young and inexperienced last year,” she said. “We struggled with leadership of the team and could never come together as a complete group. Just very inconsistent in those regards. Combine that with our strength of schedule and it caused some trouble.”

The positive spin on last year’s situation is that it gives Green and Thompson more experience this year thanks to that difficult schedule and a group of girls that grew closer through tough times.

“The turnaround all began last January,” Green said. “The training we’ve done in the offseason has been unbelievable. We put in so much work from January to the end of the summer and the players now fully understand what the expectation is.”

Green said she remembers the exact day during the offseason that her volleyball program had made the turn in a new direction.

“It was Friday, April 21, that’s the day the mindset changed,” she said. “We did a stars competition with the girls, which was a Navy SEALS type of training that tested ability on how to be great teammates and more physically tough.

“Everyone pulled their weight and pushed one another to finish out each competition. They weren’t just trying to survive like they did all of last season, they were cheering each other on and working to impress the rest of the team. We had to get that mindset, grasp it and hold onto it; that day we finally held onto it and haven’t let go since.”

That led the girls to fight during the summer months to take their game to the next level competing in summer programs and club volleyball during that time to become the best they could be.

Now, with Spain Park looming just a few days away to kick off the 2017 season on Thursday, Aug. 31, at 6 p.m., Thompson feels more prepared for the season than it did a season ago.

“The expectation for us this year is that when we walk in the gym we want to be the most competitive team on the floor, have most energy and be most engaging,” Green said. “We work on those things daily in practice, every single day.”

A leadership role isn’t being taken by any player in particular, but instead by the entire team thanks to a new tradition done every day during practice.

“We give the team two goals to write down in their player journal every day,” Green said. “The first goal is ‘What will I work on to improve.’ The second goal is a leadership goal for the day, such as ‘How will I make the team better today?’ At the end of the day they evaluate themselves.”

This year’s squad will be comprised of four seniors, but only one brings back strong playing experience. Thompson does have a strong junior class of eight girls that should provide plenty of experience for not only this year, but the next as well.

Green said there will be three returners to the same position and a few that will play at different positions than they did a season ago.

While the Warriors will have a difficult schedule yet again and a roster of girls still growing into the game, they should be much improved heading into the season.

“I couldn’t be more proud of these kids,” Green said. “They’re winners not just on the volleyball court, but off the court as well. They make coming to practice super fun because I see a bunch of smiling faces which tells me something is going right and that this is going to be a promising season.”

Bold predictions for the 2017 football season in Shelby County

By ALEC ETHEREDGE | Sports Editor In the sports world, it’s always fun to look ahead and predict what will... read more