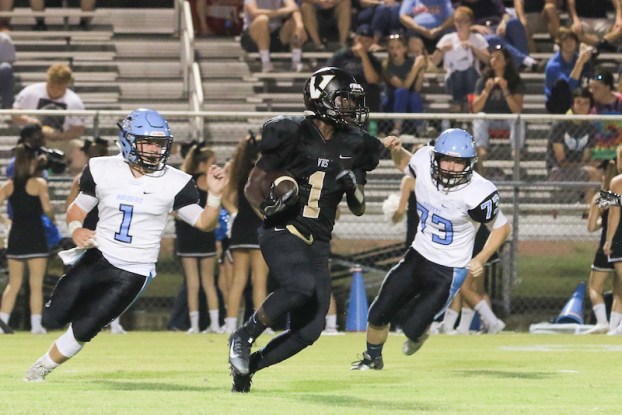 Vincent's Zavien Kelley helped lead the Yellow Jackets to a season-opening 14-13 win over Pleasant Valley. It marks their first 1-0 start since 2013 as they already have as many wins as the last two years combined. (For the Reporter/Dawn Harrison)

VINCENT – In 2016 the Vincent Yellow Jackets picked up just one win in game six of the season, but 2017 is a different year as they have already equaled that total in week one thanks to a thrilling 14-13 win over Pleasant Valley on Friday, Aug. 25, to start the season 1-0 as they got redemption from a 42-0 thumping last year at the Raiders’ place.

It marks the first time the Yellow Jackets have started the season with a win since a 26-20 win over West Blocton in 2013. The Yellow Jackets now have as many wins this season as they have combined in the last two seasons.

“This is a team that’s up a class and beat us 42-0 last year, so to come out and do this in the opener is going to give a lot of momentum to our program and I’m so proud of these kids for that,” McKeller said.

It didn’t come without some turmoil late in the game, however, as they had their backs against the wall with just a few seconds remaining on the clock and Pleasant Valley on the Vincent 5-yard line.

After Vincent intercepted a pass with 2:33 left to play leading 14-13, it looked as if the Yellow Jackets had sealed the victory, but a fumble 33 seconds later changed that very quickly.

Pleasant Valley took over on the Vincent 43 and was in business down by just one. By repetitively giving it to 5-foot-2 running back Ethan Borders, who hardly came off the field all night, the Raiders were able to drive down the field relatively easy.

“We played 48 minutes tonight and that’s something that hasn’t been done around here in a long time,” McKeller said of highpoints in the game. “You never want to fumble the ball trying to run the clock out but having to win the game the way we did is going to help us.”

The game started out slow offensively as both teams looked a bit jittery ending the first quarter in a 0-0 tie. Vincent, however, finally got its first first down of the game just before the end of the quarter and used that momentum to their advantage moving into the second quarter.

Just 1:08 into the second quarter, the Yellow Jackets put up their first touchdown of the season taking a 7-0 lead.

Shortly after, the Raiders found themselves in a fourth and 18 situation before Pleasant Valley quarterback Reagan King jolted into the end zone to tie the game up at seven apiece, which is how the game ended at the half.

Both teams came out of the break a little slow as the third quarter had very little in the way of offensive action until the Raiders were able to punch one in with 5:41 left in the third to take their first lead of the night at 13-7.

Vincent took that wakeup call and ran with it by going on a nice four-minute drive that featured several first downs. They eventually capitalized with a touchdown at the 1:45 mark of the quarter and added the extra point to snatch the lead back at 14-13 and held on down the wire for the win to move to 1-0.

“A year-and-a-half ago when I took this job people told me I was stupid,” head coach Wiley McKeller said with a laugh after the game. “It was rough last year and we lost a lot of games. We got better, but we were just in a really bad place. The guys have worked so hard to prevent that from happening again.”

Offensively, quarterback Dusty Davis completed 8-of-13 passes for 132 yards and one touchdown to his favorite target Zavien Kelley. Kelley ended the night with five receptions for 73 yards and that lone touchdown.

Chris Hardie led the rushing attack with 54 yards and one touchdown on 18 attempts.

Kelley and Hardie also led the way defensively. Kelley picked up four tackles and one interception in the secondary, while Hardie grabbed six tackles and two sacks to lead the team. Dontrell Bruno also added five additional tackles and another key interception.

Vincent will have a bye week on Friday, Sept. 1, before traveling to LaFayette on Sept. 8. LaFayette won the region championship by going a perfect 7-0 last year and defeated the Yellow Jackets by a final of 62-6.

GSCCC ‘State of the Schools’ luncheon set for July 26

By GRAHAM BROOKS / Staff Writer PELHAM–Summer is slowly coming to a close and the Greater Shelby County Chamber of... read more