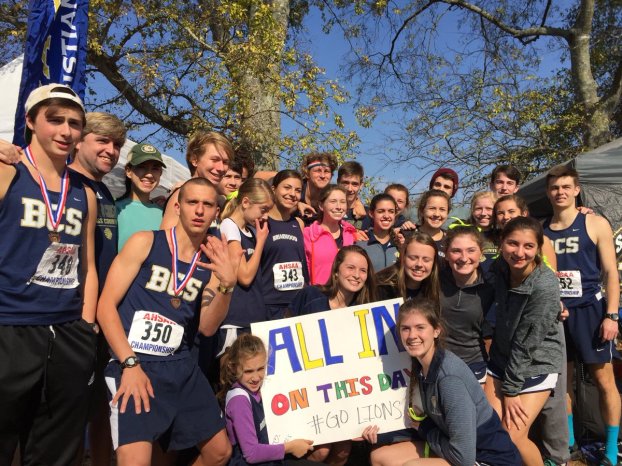 Briarwood’s boys and girls cross country teams both finished in the top 10 at the state meet a season ago and have strong returning rosters. (Contributed)

Both the Briarwood boys and girls cross country teams had strong top 10 finishes in the AHSAA Cross Country State Meet, but neither ended the season where they wanted to — on top.

The Lady Lions finished in seventh at the state meet a season ago, while the boys just missed out on a championship finishing in fourth, but heading into the 2017 season both squads return strong rosters that have given them even higher aspirations on the course.

Girls’ head coach Aaron Margene wasn’t disappointed in the way his team finished last year, but knows with the amount of talent he has back, not finishing higher this year would be a disappointment.

Alabamarunners.com recently released its list of top 100 the returning runners for both the boys and girls division in every classification and you would be hard to find a team that has more returning talent in the top 100 than Briarwood’s girls team.

The Lions will be led by Adrienne Goolsby on the course, who came in as the No. 41 girls runner in the 5A classification. Goolsby finished 45th in last year’s state meet with a time of 21:55.09. The impressive aspect was that that marked her eighth grade year of middle school, meaning she still has four years of eligibility left and plenty of improvement to make.

Not too far behind Goolsby will be Madeline Simmerman and Lauren Musachia, who were ranked as the 58th and 59th best returning 5A girls runners, respectively. Both had strong performances at the state championship meet and bring back more youth. Simmerman is back as a sophomore, while Musachia is in her junior season.

As a freshman last year, Morgan Harris finished 63rd in the state meet and sits in that same spot in the top 100 for her sophomore year.

Briarwood’s girls may not have the overall best runner in the state, but the depth their roster can rely on with eight returning experienced runners will prove to be more important as they try to improve from last year’s finish.

The boys don’t return quite as many runners in the top 100 of the 5A classification, but they do return two of the state’s best runners and four in the top 50 from a team that finished third in the state meet a season ago.

The losses of Daniel Darwin, Jacob Wong, George Moore, Will Windham and Wolfe Anderson will be tough as all finished in the top 73 of the state meet last year, including Darwin’s top 15 finish, but several are waiting to step up and lead this team.

Those leaders will start with one of the state’s best runners in Zack Howard as well as Wade Herren.

Howard, a senior, is ranked as the No. 3 returning runner in 5A and finished fifth in last year’s state meet with a time of 16:46.62. He should be considered one of the favorites to win the individual 5A state championship in 2017.

Herren will also be a senior this year and brings back a finish of 19th from last year’s state meet, which has made him the No. 15 returning runner this season.

Those two will not only be key if this team wants another top 3 finish, but will also be looked at for their leadership skills going into their senior season as two dependable runners that can perform on any stage.

Bryant Wood, ranked 37th in the top 100, will give the Lions a third dependable senior leader on the squad. He finished 49th in last year’s state meet with a time of 18:24.61 and should finish a lot higher on average in 2017.

Fisher Stephenson and Harrison Gualdin are two juniors that will sit behind that crew of seniors, giving the Lions a veteran laden squad. Stephenson was the fourth runner from Briarwood in the top 50 coming in right on the number as the 50th best returnee, while Gauldin found himself ranked No. 84.

Both teams are in different situations as the girls have a lot of young runners, while the boys have several veteran runners, but the goal is consistent for both: a state championship, which is very possible for each squad.