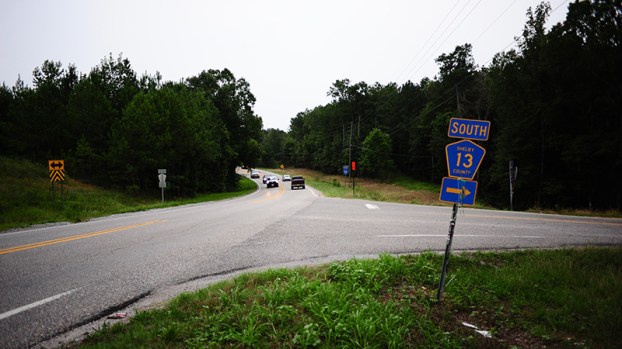 Turn lanes will be added to the intersection of Shelby County 52 and 13 in Helena in the coming months to alleviate traffic congestion. (Reporter Photo/Graham Brooks)

Improvements coming to intersection of Shelby County 52 and 13

HELENA–Traffic relief will soon be coming to a congested intersection in Helena after the Helena City Council passed a resolution to make improvements at the Monday, Aug. 28 council meeting.

The intersection of Shelby County 52 and 13 in Helena has caused many traffic backups in the past due to the absence of a traffic light and turn lanes for vehicles trying to make a left turn from Shelby County 52 onto Shelby County 13 as oncoming traffic does not stop.

This in effect causes multiple cars on Shelby County 52 to come to a standstill that is at its worst during rush hour traffic. There is also potential safety concerns when vehicles attempt to pass vehicles attempting to turn on the shoulder of the road.

To combat this problem, the Helena City Council passed Resolution 08282017 in conjunction with the Alabama Department of Transportation that will bring turn lanes to the intersection.

“The utility board spent almost $70,000 moving the water lines there so this project could proceed more quickly so we’re basically a year ahead getting this done since we went ahead and moved those water lines,” Helena Mayor Mark Hall said. “This is a typical resolution that we need for the state and county partners to move forward with this turn lane project at 52 and 13. It’s going to add turn lanes there to help make the traffic keep moving. Little projects make big differences.”

Hall noted that the city is pushing to try and add a traffic signal at the intersection as well but at this time the county will only make the turn lane additions.

Work on the intersection improvements is expected to begin in the coming months and as early as November.

Harvest of Hope to raise funds for local nonprofit