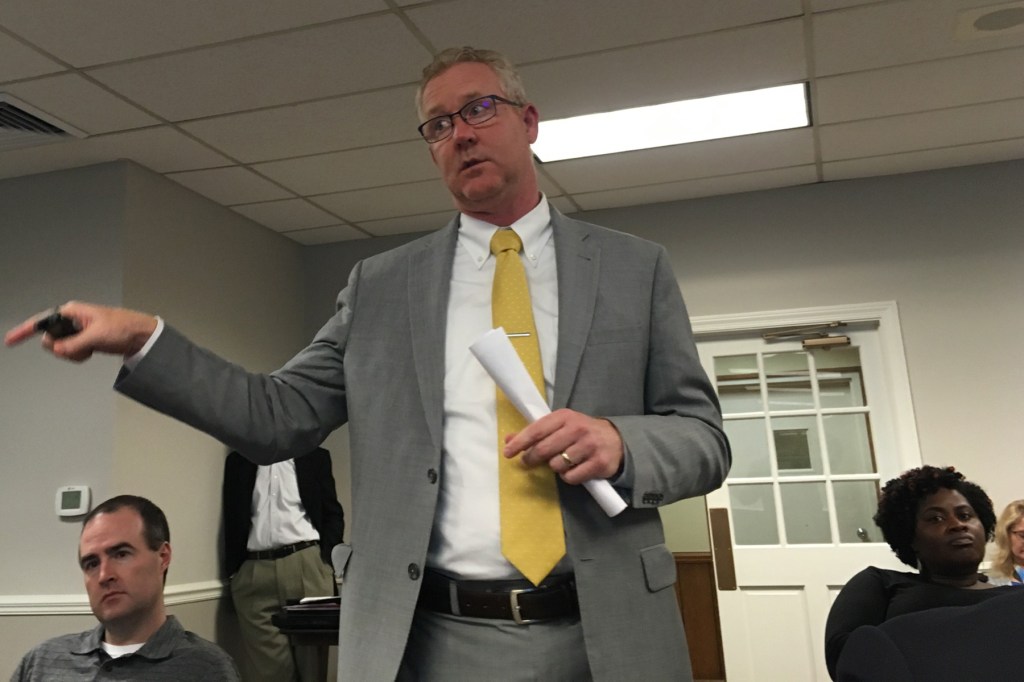 PCBOE Superintendent Scott Coefield discusses the budget for the 2017-2018 school year at a meeting on Monday, Aug. 29. (Reporter photo/Amalia Kortright)

PELHAM – The Pelham City Board of Education held the first budget hearing for the 2017-2018 academic year at a monthly board meeting on Monday, Aug. 28.

“We had, last year, 3,178 kids. A lot of our funding is based on enrollment from day 20,” Coefield said. “Our initial numbers at the beginning of this year are about 3,195, which is up by about 17 students. The 20-day window where all of our stuff is documented starts after Labor Day, but that’s where we are right now.

“We are one of the few school systems in the state of Alabama that has a greater percentage of local funding than they do of state or federal funding,” Coefield said.

For this year, PCS’s operating budget is $42,951,420. While the Alabama State Department of Education recommends that districts have $2.8 million for their one month operating balance, Coefield said the PCS operating budget for the 2017 fiscal year is an estimated $6.3 million.

“That would put us at over two months of reserves,” Coefield said. “That’s quite an accomplishment for a new school system that has built two schools and had lots of other construction renovations and such.”

A deficit of $749,326 is projected for this year’s budget due to $6 million worth of constructions at Pelham Oaks Elementary School and Pelham High School.

“This is a planned thing,” Coefield said. “At Pelham Oaks Elementary School, we’re renovating the old gym into three classrooms and adding a new gym. We’re adding a new athletic facility at Pelham High School. We have revenue that’s going to be coming in with the sale of Riverchase Middle School.”

According to Coefield, the BOE’s goal is to end this year with $5.6 million, which equates about two months in reserves.

“We’ve been putting some money back along the way,” Coefield. “If we can build two new schools, continue our renovations with these and still end this next fiscal year with two months, that would be really nice.”

Out of the proposed expenditures for the year, Coefield said BOE plans for the most funding to go towards instruction and instructional support.

“I’m really proud that less than three percent of our expenditures are from administrative costs,” Coefield said. “It’s important for us to be putting funds where they need to be.”

Coefield also reported that PCS is ranked sixth in the state in local revenue per child, administrative costs are lower for PCS than similar sized school systems and debt service will be above average for similar sized systems.

A second budget hearing is scheduled for 7:30 a.m. at Sept. 11 at 7:30 a.m., when the BOE will review the budget for a second time and vote on any amendments made. More information about the PCBOE budget is available online at Pelhamcityschools.com.