COLUMBIANA – A 20-year-old Alabaster man is being held in the Shelby County Jail on bonds totaling $60,000 after he allegedly unlawfully entered a woman’s home earlier this month and stole thousands of dollars worth of items. 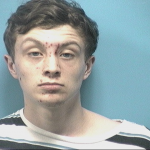 The Alabaster Police Department arrested Evan James Bomer, who lists an address on Diane Lane in Alabaster, and charged him with felony counts of first-degree theft of property and second-degree burglary.

Both charges are Class B felonies, and are punishable by up to 20 years in prison apiece upon conviction.

Bomer’s charges came after he allegedly did “knowingly enter or remain unlawfully” in a woman’s home with the intent to steal items from the home sometime between Aug. 17 and Aug. 18.

While at the home, Bomer allegedly stole two televisions, an iPhone, an Apple Mac computer, a laptop computer, a sound bar and a Regions Bank credit card. The total value of the items was $3,275, according to the Alabaster Police Department.

According to Shelby County District Court records, Bomer has a lengthy criminal history, with several past drug, forgery and theft charges in Shelby County.

As of Aug. 30, Bomer remained in the Shelby County Jail, and did not yet have a future court date listed.