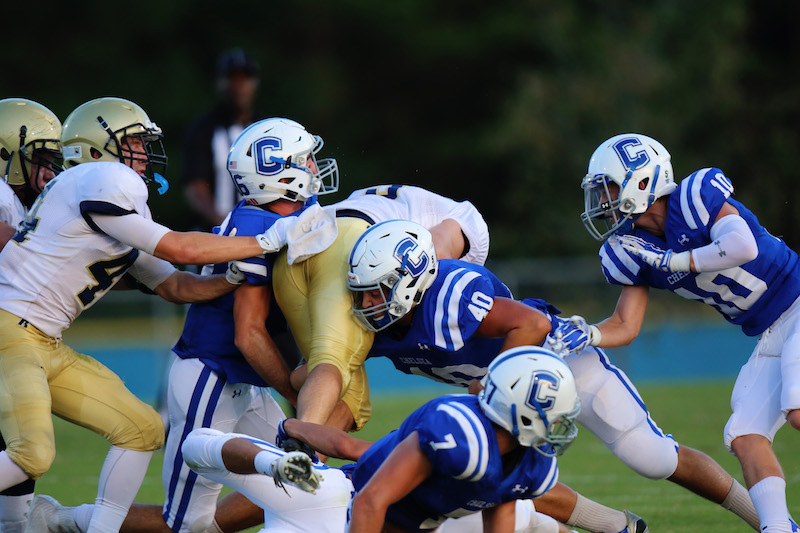 Chelsea will travel to Briarwood this Friday night for our second Game of the Week for the 2017 season. It should be a low-scoring battle between two strong defenses. (File)

While we savored in it as long as we possibly could, week one of the 2017 high school football season has come and gone in the blink of an eye, now it’s time to jump ahead to week two as we predict the outcome of all eight games this week including our second Game of the Week.

Chelsea at Briarwood (Game of the Week)

In my keys to the game this past Friday night for Chelsea’s matchup with Oak Mountain, I said they had to have strong offensive play from newcomers and the defense would have to step up to keep them in the game. One happened as the Hornets’ defense hounded the Eagles all night, but the offense never found its rhythm.

It’s something Chelsea will have to improve on heading into week two as they head to Briarwood to take on what many consider to be the favorite to make the 5A state championship game.

This will be the second straight week that Chelsea will be featured in our game of the week, in part due to the in-county matchup aspect, but also due to the importance for each team.

Last season, Chelsea was coming off a 49-33 win in week one against Oak Mountain, this week they’ll be coming in 0-1 after falling 21-10 to the Eagles in week one and looking for a quick answer offensively.

Briarwood, on the other hand, is coming off a jamboree game against 7A Vestavia in which they got great game experience in a relaxed scrimmage atmosphere.

While Chelsea started the season with a combined 92 points a season ago, I see it being closer to 27 this season as both defenses seem to be the highlight of this game, which means another low-scoring game for the Hornets. Briarwood 20 Chelsea 17

Despite some question marks on the defensive side of the ball, Spain Park was probably the best overall county team in week one. The offense looked sharp and revamped under new offensive coordinator Marty Rozell with the addition of some hurry up and option attack offense as they went on to win 31-19.

It led to D’Arie Johnson and Jalen Henderson both running for more than 100 yards on the ground and a solid performance for both quarterbacks that played in Braxton Barker and Mason Pronk.

Now it’s on to week two and a rematch with Muscle Shoals, a team the Jags beat 35-18 at home last season. The Jaguars defense looked strong enough in game one and is sure to improve even more this week after giving up just 19 points in week one. That paired with an offense that already looks at least as good as last year, if not better, should create for a solid week-two performance. Spain Park 38 Muscle Shoals 24

After starting the season 1-0 this past Friday night with a 21-10 win on the road at Chelsea, Oak Mountain will now host 6A top 10 team Hillcrest-Tuscaloosa in week two.

The Patriots actually fell in week one to a good Oxford team 21-0, meaning the offense seems to be lagging behind from where it was a year ago. With Oak Mountain’s offense taking advantage of that same situation this past week by giving up just three points for all but one minute of the game, they’ll have another good opportunity to do the same in game two.

While Hillcrest will be a tougher 6A opponent than Chelsea for the Eagles, Oak Mountain’s trench warfare style offense will keep this game low scoring, giving them a chance to win late. Oak Mountain 17 Hillcrest-Tuscaloosa 21

Helena took on defending state champion and No. 1 6A team Ramsay this past week in a jamboree that featured sloppy play from both sides, but in the end the Huskies competed against a very good team only falling 27-14.

Still though, this week the regular season kicks off and it’ll be a completely different animal as Mountain Brook comes calling in week one. Last week the Spartans took down Gulf Shores 56-24 showing they have the offensive firepower to make the Huskies worry.

With some concern in the secondary this past week for Helena, the Huskies are going to have to step up on that side of the ball quickly if they want a chance to start the season 1-0. Last year, Helena was in a similar situation as Mountain Brook was coming off a 56-6 win, but the Huskies only fell 21-14 when the two met on the field the following week.

Pelham let the disappointment of a heartbreaking loss get the best of them in 2016 as they fell 42-14 to Mortimer Jordan in week two a season ago after falling 21-14 to Homewood to start the season.

This year, the Panthers will be in the same boat coming off a 29-22 loss to Homewood in the final minute of the game. They went on to finish 1-9 last year and it all spurred from that first loss.

Pelham can’t let history repeat itself if it wants to have a strong season in 2017 because the doubt can start to creep back in very quickly. Even if they lose, the Panthers at least need to make this game more competitive, which I fully expect to happen.

The defense was as good as I’ve seen from Pelham in a long time in week one and the offense improved slowly throughout the game. While the offensive side of the ball still has tremendous strides to make, the defense will be able to keep Pelham competitive against the Blue Devils. Pelham 17 Mortimer Jordan 27

It was a heartbreaking loss for Calera in game one as they had a chance to win late in the game, but a pass on fourth down fell from the receiver’s hands and with it went a 29-27 loss to Mae Jemison to start the season 0-1.

In week two, the Eagles travel to Bibb County for a rematch looking to repeat last year’s 49-34 win over the Choctaws. Going into last year’s game, Bibb County had taken down Jemison 47-13 in week one, but this season they were only able to handle the Panthers by a final of 14-7, meaning their offense isn’t quite as potent.

Calera had some very questionable absences in its loss to Mae Jemison starting with the defense. What was supposed to be one of the highlights of this team, the Eagles’ defense gave up 29 points in week one. Also, the run game was non-existent for a team that had three backs run for 700-plus yards a season ago with its leading rusher back.

I fully expect head coach Andrew Zow to make adjustments in week two as an offensive mind to help his guys get to .500 through two weeks of play. Calera 38 Bibb County 21

Shelby County vs. Holt (Moved to Thursday due to weather)

Shelby County opened up the season with a 20-14 loss to Childersburg in a jamboree this past week, but the Wildcats only played starters for a little under three quarters of the game.

It was a good way to get them prepped for the season and in the Wildcats’ first regular season game of the year, they’ll get another opportunity to do the same thing when they host the Hope Ironmen.

Not only is Shelby County the better team, but Holt finished last season 0-10 — including a 49-12 loss to the Wildcats — and have just four wins in the last five years. Shelby County 42 Holt 10

Last year Montevallo and West Blocton combined for 93 points as the Bulldogs pulled off an opening-night 59-34 win over the Tigers to start the season 1-0.

That was under the leadership of Zac Oden, who threw for 3,000-plus yards and had plenty of help around him last year. This year, Oden is gone, but new quarterback Jay Sullens steps into his place and looks more than capable of running the offense along with several key playmakers back.

With an experienced defense back and plenty of offensive firepower to work with, I expect head coach Brandon Wilcox to start the season with a statement by beating a higher classification team for the second year in a row. Montevallo 42 West Blocton 21